DIERKS BENTLEY IS HER GEORGE JONES 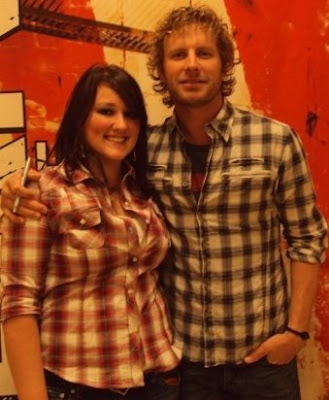 At age 15, Angela believed all the stereotypes about country music--country is about tractors, dogs, trucks, etc. And while country music does mention all those things, she had no idea it was so much more.

"My dad had always been a country fan and started playing it more whenever I rode in his truck with him. I scowled at it most of the time," admits Angela, a DB Congress rep in Wisconsin. "But then I heard, 'What Was I Thinkin' and my whole world was turned around. I had even heard my dad talking about that song's music video and never paid any attention until I heard it on the radio. I remember thinking, 'this song is awesome! What was I thinkin' not listening to more country?' Then I watched the music video and that was it. I was countrified by Dierks Bentley!"

Today, Angela is a Senior at St. Norbert College in De Pere, WI, near Green Bay, where she is about to graduate with a degree in Communication and Media, with a minor in Graphic Design.

"Over the years I collected all Dierks' albums as they came out. My whole life I wrote my own music, and continued to do so with the influence of Dierks. I drifted in and out of country music but remained a true Dierks fan throughout the years.

My older brother Phil deployed to Iraq late 2006, and then my fiance, Charlie deployed to Iraq a few months later. Those were some hard, lonely months I faced worrying about them while they served our country. I have never gone through anything more trying, stressful and fearful in my life and I am SO GRATEFUL that they made it back safe.

What helped me get through it? I wrote my own music to cope, but mostly spent my time listening to Dierks when I was really down and out (in fact I always listened to him whenever I was sad about anything or having a bad day). His music is just so real, pure and anyone can relate to it. It's really HIM singing the songs and that's what makes the difference. He writes his songs from his heart. His music helped me get through those deployments."

For a Computer Graphics class project, Angela was tasked with choosing a photo to produce her own stylized illustration (a composition of different colors, tones and shapes chosen by the artist to represent something or someone in real life). She used the program Adobe Illustrator to create the tones and shapes.

"What better way to show my inspiration and appreciation for Dierks than to make him my subject for this project? So I chose to do a photo of him. I spent days trying to find the right picture. The internet has a lot of pictures of him, but none that caught my eye. I found that the really awesome, soulful, meaningful pictures can be found on his facebook page where all the fans post their pictures of him. I sifted through that and narrowed down my choice. I found one by Andrew Allen that was perfect and emailed him for permission to use it. 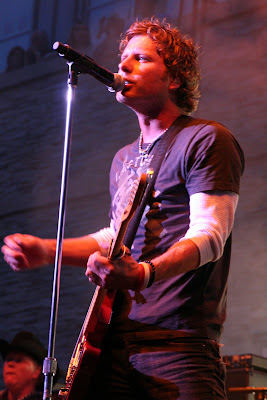 It turned out better than I thought it would and I am really proud of it. I think it expresses exactly who Dierks is and how I feel about him--as well as how many other fans feel about him." 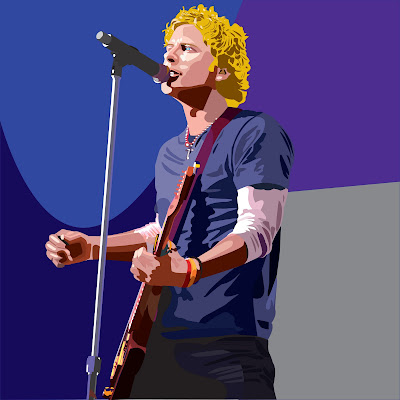 Now her little brother, Jimmy, is deployed to Afghanistan for 12 months, and she's finishing up school and feeling like life is testing her more than ever. "Sometimes I wonder how I make it through, but I do. I'm continuing to write music with a few partners, and I listen to Dierks ALL THE TIME to get me through the days. And now I'm a pure-nothin'-but-country fan."

"You know how Dierks loves George Jones? Well Dierks is my George Jones. Dierks is my hero and my inspiration. The story of his life, all he does with music, his family and the community is so amazing. He is a fantastic singer/songwriter/performer and an all-around good guy.
I just hope he gets to see the illustration someday. I got to meet Dierks at a concert at The Island Resort and Casino in Upper Michigan (photo at top). I tried to tell him how I felt, but I got all choked up. After the concert I saw him out by his tour bus and gave him a poster. I yelled to him as he was walking away, "Dierks, you're my George Jones!" but he didn't hear me.

Thanks for letting me share my work and the story behind it. I love being a part of Dierks' fan network!"
Sincerely,
A TRUE Dierks fan for life
Angela
Posted by DB Congress at 8:46 PM