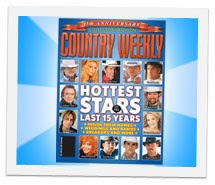 Fifteen years ago, Country Weekly began publication of their devotion to the country music world--"a direct link between country stars and their loyal fans"--April 12, 1994.

You won't want to miss this Collector's Edition, featuring the hottest stars of the last 15 years, including our very own DB Congress president, the dude himself--Dierks Bentley!

Country Weekly has been very kind to Dierks since he came slidin' in like Bo Duke to the country music scene in 2003.

All throughout this special edition, CW features "CW Shout Outs" from the artists. One of the funniest was from Blake Shelton: "15 years old? You aren't even legal! Call me whe you turn 18. Love you, Country Weekly." Not to be out 'done', git er done comedy king Larry The Cable Guy said, "...after a few Blue Collar Comedy tour shows, there it was--an article on me. I was so excited I called all my friends and my parole officer and they had the same response--'You idiot! I'ts 3:30 in the morning!'"

I'd like to give my own shout out. I was so excited to see the DB Congress featured in Stars Up Close article (He Looked Up, October 6, 2008) telling the story of that cool Atlanta night with Dierks and his congress! CW was so gracious, emailing me back and forth to make sure everything was accurate! True professionals! But then in March 2009, after launching this website (www.dbcongress.com) in February, CW published "Dierks Fans Go to Congress" on the What's Online page--I was so surprised and happy! More Dierks coverage! More CW sales!

He's decidely absent from the "15 Most Influential Stars" over the the last 15 years. But I predict he will be in the top 20 by the time Country Weekly publishes their 20 year anniversary issue!

On behalf of all the DB Congress (Dierks Bentley Fan Club) Representatives, THANK YOU Country Weekly for always having at least some little morsel of DB in every issue! We especially appreciate the two solo covers in 2009 and all the "letters" and Stars Up Close about Dierks from DB Congress reps! Congratulations on 15 years! We look forward to another 15 and many more Dierks covers!