Eric and his band rocked the crowd with their true to the bone lyrics, guitars, and banjos. The crowd was already going crazy even before Dierks hit the stage. In the middle of his set Eric said tot he crowd, ‘We came here to party with ya’ll tonight, drink beer, play our guitars, and sing songs that are true.’ The comment made me realize that is what country music is all about and why there are so many dedicated fans. Once Eric finished his set, he humbly thanked the crowd and left everyone in anticipation for Dierks.

The lights brightened and the stage crews bustled about the stage recreating the set for the superstar. A short agonizing wait later, the lights went down and a video shows up of Dierks, he then comes on the mic and asks ‘Hope ya’ll are ready for a party?’ The crowd went crazy as he and his band-mates appeared on stage and cranked up the sound. The entire show was upbeat, in your face and pure Dierks Bentley. He made a comment about his recent recording with long-time song-writer, Patty Griffin. The song ‘Beautiful World’ has had a grammy nod recently, and the duet performed the song the night before on the ‘George Lopez Show’. No one was expecting it but Dierks introduced the talented Ms. Griffin and she gracefully walked out to join him for a Johnny Cash song, they later performed their recent recording of ‘Beautiful World’.

Towards the end of his set Dierks invited Eric back out onstage, and it was clear he had been having a good time backstage. They sang a few more songs for the crowd and obviously, unwillingly exited the stage. The ambiance of the Wiltern, the talented musicians and of course the raw voices that make country so real made the entire night an unforgettable event. 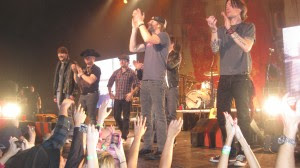