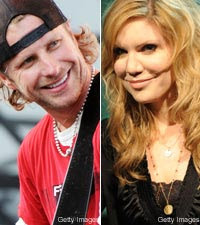 We all know the hazards of "drunk dialing," but what about texting after you've enjoyed a few cocktails? Dierks Bentley found out the dangers when he sent a text message to one of his musical idols, Alison Krauss, while under the influence. On a recent tour bus trek from Nashville to Iowa, Dierks and his band mates were passing the time by having a "battle of who can play the sadder song" from their iTunes collection, he tells The Boot.

"We're drinking all these beers and I go straight to [Krauss'] 'Forget About It.' You should never listen to Alison's music before 6:00 PM. It's nighttime music. Have a Bud Light or some Jack Daniels with a couple of cubes of ice ready to go. It's heartbreak music."After several adult beverages, Dierks texted Alison. Two days later, he received a response from the multiple-Grammy winner asking, "Did they hurt or did they help?"

With no memory whatsoever of texting Alison, Dierks figured she'd erroneously replied to him. He texted back, gently suggesting that as happy as he was to hear from her, perhaps she sent her message to the wrong guy. She texted him back, writing, "No, you texted me a couple of nights ago. You did say you were drinkin'." Her text jarred his memory. A chagrinned Dierks wrote her back, confessing, "You're right. I'm so sorry. I'm so embarrassed. Yes, it did help because our goal is to get as lonesome as possible, and your music causes that. So thank you." Krauss reply? "Ha!"
Posted by DB Congress at 2:13 PM