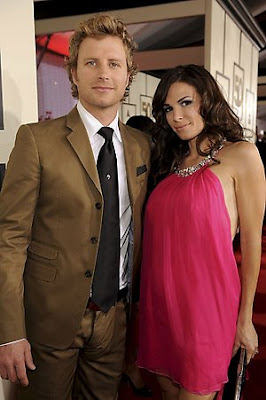 Congratulations! Dierks Bentley and Cassidy Black became Mr. and Mrs. four years ago, December 15 (some sources say Dec. 14). Many of you know the love story well, but for those who don't...
Dierks and Cass attended Ingleside Middle School together in Phoenix, Arizona. Dierks was dating Cassidy's best friend in 8th grade but had a crush on Cass. They had their first kiss at 15 or 16 and tried to date but he says he was too immature for her. Country Weekly's April 13, 2009 issue featured Dierks on the cover--the first ever--and the article includes an old love letter from Cassidy to Dierks: "All the girls think you're cute. I don't know. I don't love you. But if I did, I certainly wouldn't tell you but I don't. Just so you know..."
Then about 10 years ago (he was in Nashville) they started writing letters back and forth and she visited him a few times but it didn't last. He didn't think he could make her happy with his on-the-road lifestyle. Then she came out to see him in Vegas February 4, 2005 as Dierks was getting ready to go on tour with George Strait. "She walked on the bus and I just knew...this is the one I want to be with," says Dierks. Cass says " it was a weird feeling and it was right when I saw him..." They still celebrate that date as their most important anniversary.
But they married on December 15, 2005 (some sources say Dec. 14). Just the two of them eloped to Mexico. Dierks even surprised her by having a a stylist friend bring a dress for her. "I was nervous! You don't want to pick out a woman's wedding dress!" The Chloe' dress that was selected was "perfect!" according to Cass.
Cassidy has been the inspiration for some of Dierks' most powerful songwriting since then. Like Every Mile A Memory, Long Trip Alone (although she says God stole that song from her), Feel That Fire, and I Wanna Make You Close Your Eyes, just to name a few.
They welcomed baby Evie October 4, 2008 into their world--and baby make 5 (Canine kids, George and Jake round out the family).
We are so happy for you Dierks and Cass! Congratulations and we wish you many years of happiness to come!
Posted by DB Congress at 8:18 AM