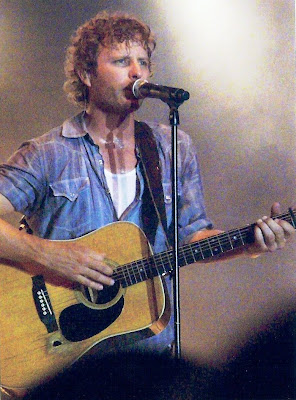 Dierks Bentley Congress Ohio representative, Dawn, and her sister Quinn don't get to see each other as often as they would like, as they are both in different towns and work different shifts. But they DRT'd together for Dierks ! Enjoy Dawn's story:

The day of our road trip started off at noon. It was a really hot summer day--in the high 80's. My sister Quinn and I decided to take her SUV and GPS. I don't know how we managed years ago without a cell phone and GPS. We don't get to see each other too often. She lives in one town and works 1st shift. I work 2nd shift. So our time together is few and far between. Our last road trip was to see Dierks at Riverbend in June of 2009. He was with Brad Paisley and my sister is a huge Brad fan. It was our first concert with either performer. She was really amazed at Dierks and became an instant fan of Dierks that day.

So back to this DRT (Dierks Road Trip). I called her up in March with plans to see Dierks at Clay Park in North Lawrence, Ohio on June 18. It would be a four hour drive. I asked if she was ready for another concert. She was ready to see Dierks again. I ordered our tickets that day and started to count the days down. I was excited with Dierks coming out with a new album. What true fan isn't? I am not a huge fan of Bluegrass music but was excited for anything new from Dierks. I kept up with Dierks online with concert reviews and video clips of Dierks on DB Congress. When the clips of the new album started getting released I fell in love with Up On The Ridge. You can truly tell that Dierks is totally into his music on this CD.

When I got the e-mail with the news of winning a Meet and Greet I yelled, "Wow, I get to met our president of DB Congress!" I read a lot of previews from other fan club members and heard how down to earth he is. I could hardly contain my excitement counting down the days to the show.

When we left that day it was really hot liked promised, and this was an outside show. There were three acts that day--JoDee Messina, Jake Owen and Dierks. I was to be at the small bridge that led up a small hill to meet Dierks. There were other fan clubbers waiting and another group of people to meet Dierks also. They were supposed to go up before us but we had a smaller group and got to go first. I got to see JoDee perform before my M&G. She did a great show. I left right after her performance to meet Dierks. We were standing in the full 90-degree sun while we were waiting to see Dierks. Finally they took us up the small hill to see Dierks. They told us we could have one item signed and ask a quick question. There would be time for questions at the end of the photos.

Then to the left of us, out walked Dierks from his tour bus. I was so excited to finally meet him! My mind went blank but he gives the best hugs. I asked if he had the set list for the show yet. He told me no. I said that was too bad. I wished I could have a copy to give Ronna for this article. He said that he would try to get it to me later if I could get to the front of the stage. Then he signed my DB Congress tee-shirt. The other fan clubbers got their hugs and we got our group photo. 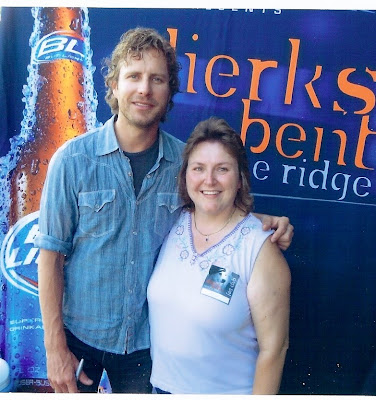 He played at Colorado the day before and said he just got there in time to catch some of JoDee's show. He said he played with JoDee before in other shows early on in his career. She did a great show. Someone wished him an early Father's Day and asked if he was to see his girls on Sunday. He said that wasn't possible with being on the road that weekend but they talk often on the phone. We all told him we love the new album. We were kinda rushed. He was running behind and we understood.

As I walked back down that little hill, I just smiled. Wow, he really is a down to earth nice person. I met up with my sister and we got a cold drink. We lost our spot at the stage when we left. The closest we got was about 10 feet after that.

Jake Owen came out on stage during Dierks performance. It was posted on Twitter. 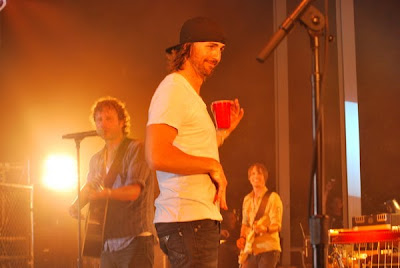 "my friend @jakeofficial rocked it out 2nite. he is also a great air bass gtr plyr. pic to prove it #fb" -Dierks Bentley

I have to give all three a thumbs up. It was so hot that day. Even when Dierks was up on stage and it was dark. The fans just kept pushing us forward as Dierks performed. We were so crushed. It was hard to get some photos, but Quinn managed. 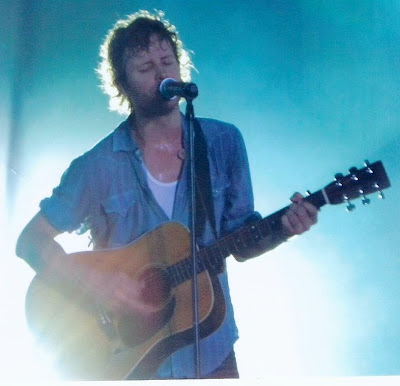 The ride home was filled with girl talk about the show. What a great performance Dierks did. He was jumping around the entire stage. The only song he did from UOTR was Up On The Ridge. I wished I could have seen him out on tour earlier in the year. He really puts his heart and soul into his concerts. Thanks, Ronna, for keeping us up to date on Dierks. I appreciate you doing this.

You're welcome, Dawn! Thanks for sharing! Here's a tip for next time--when you go to your M&G have your sister stay at the front of the stage to save your place!
Posted by DB Congress at 8:33 AM