Meet DB Congress representative, Kristi, from Pennsylvania! She bought tickets to see Dierks in Allentown seven months ahead of time and won a Meet and Greet through the DB Fan Club! Here's her story: 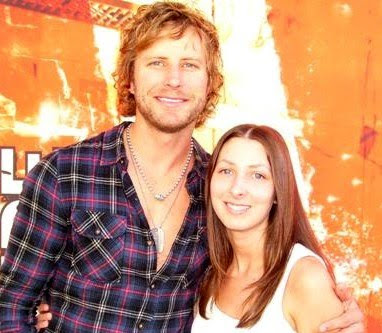 I went to see Dierks at the Allentown Fair on September 5th, 2009 in Pennsylvania. This was the second time I had seen him play there. The first time I saw him in Allentown was three years ago. This time Dierks was there to open up for Brad Paisley. I had been looking forward to this concert since February when I bought the tickets. I was able to get 5th row seats right near the catwalk thanks to Dierks’ fan club presale.

I was even more excited about the show when I got an email saying that I won a meet and greet with Dierks! I honestly didn’t think I would get one BEcause I knew a lot of fan club members would be at the show. All I can say is the meet and greet was awesome! There were about 20 of us who got a Meet and Greet with Dierks. I got to talk to several fan club members while we were waiting in line to meet him.
We each got a chance to talk to Dierks. The first thing I said to him was how great it was to have him back at the Allentown Fair. He said it was great to be back. I also talked to him about a previous show I had been to of his and he remembered it very well. It always amazes me how much he remembers from shows that were from a long time ago. After we chatted we got our picture taken and he gave me a hug. Before I left he made a comment to me about my white tank top and blue jeans that I was wearing. I was glad I decided to wear that because during the show Dierks asked where all the white tank tops were and I waved my hand and he smiled and pointed at me! That was awesome!
During the Q&A he talked about how he was out driving around in his jeep. He also said he went to the gym. I told him that I saw him on the CMA Fest special that was on TV. He said he watched it and he thought it was a really good show. He also talked a little bit about Twitter. Someone asked him what he has planned for the rest of the year. He mentioned some of the shows that he was going to be playing at. After the Q&A he gave each of us a hug and thanked us for being in his fan club. You can tell that he really appreciates his fans which is what is so great about him.
As soon as the meet and greet was over and I got to my seat the concert started. Jimmy Wayne was up first and then Dierks came on. He did an awesome job! Dierks sang for about 45 minutes and sang 10 songs. The crowd really seemed to love him. He always puts on a great show. He was running around stage and used the catwalks a lot. He always has so much energy! Each time I see Dierks in concert he always gives 100% every single time! You would never know that he played a show every night that week including a couple shows in Canada prior to the Allentown show.
When I was leaving the venue after the concert was over I heard a lot of people say how much they loved Dierks. I overheard a couple people in front of me say that they mainly came there for Brad but after the show was over they said they liked Dierks better! When I heard that it made me so happy. It made me so proud to be not only a Dierks Bentley fan but also a fan club member.
Hopefully I’ll get to see him in concert again soon. I can not wait until he starts headlining again!
Posted by DB Congress at 11:34 PM