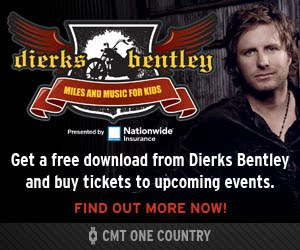 Ever since Dierks Bentley's Feel That Fire CD was released February 3rd of this year, he has been singing his own praises (and rightly so!) for Beautiful World, the duet with Patty Griffin. In March, Dierks was a guest on the Eddie Stubbs, WSM radio show, and I was lucky enough to have Dierks himself answer the phone when I called in to comment on the song:

ME: Hi, This is Ronna, from Tampa, Florida.
DB: Hey, this is Dierks!
ME: You're kidding?! They've got you on the phones?
DB: Yeah, so how ya doin?
ME: Great! We just listened to you on the Opry, you guys sounded great! We are so proud of you!
DB: Thanks! So what do you think of Beautiful World?
ME: You know I love that song...
DB: So do you think between 'close your eyes' and BW, which one should be the next single?
ME: I love both, but I think close your eyes has a better chance of making it to #1 on radio.
DB: I know, that's the cold hard truth (*he said disappointedly).(*I felt bad, cos he had just said on the air that he wanted to be remembered for that song).

Knowing how much that song means to Dierks, I have to admit when I heard Jack Ingram's next single release was 'Seein' Stars,' featuring Patty Griffin, I was a little worried. How will it look if Dierks now releases HIS Patty Griffin song!

But today, I was reminded of how smart Dierks is. In conjunction with CMT One Country and to raise awareness for his Miles & Music For Kids event (this year several events nationwide), Dierks is offering a free download of Beautiful World! Genius, dude!

Now everyone will get to hear the song even if they don't have the album. And what better match than to pair the positivity in the song with the generosity of giving to the worthy Children's Miracle Network charity.