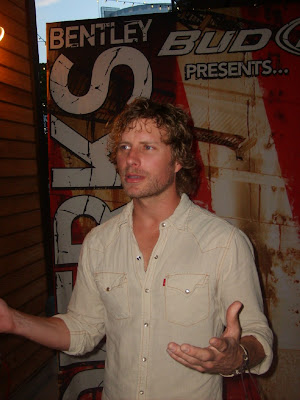 "The Show in Denver last night was AMAZING, but what else would you expect from Dierks! When we got there we got our tickets and my M&G pass. Then we went to find our seats, which were about 10 rows from the left side of the stage! A little while later it was time for me to go to the M&G. I went and found where I was supposed to go and then stood in line and waited and waited and waited....ok, it was probably only about 10 minutes, but when you're waiting to meet Dierks, 10 minutes seems like 10 hours!

Finally it was time to go in. We were taken down to the area where we we going to meet Dierks and they explained the rules, and then Dierks came in! He took pictures and signed autographs for everyone, sadly only one per person. When it was my turn to meet him, he smiled and said "I've met you before, haven't I?" I couldn't believe it! I said, "Yeah, I met you last year in Colorado Springs." He apologized that he didn't remember my name, but I told him it was ok, and asked him to sign my DB CONGRESS shirt. He signed it and thanked me for representing the congress. 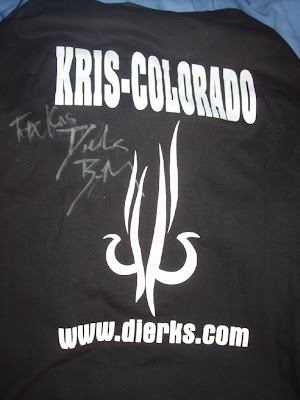 After he took pictures with everyone else, we all got to ask questions and just talk for awhile. It was way too short but totally worth the wait. As we were leaving he was saying goodbye to everyone, and as I walked by he gave me a hug and said thanks again for coming! 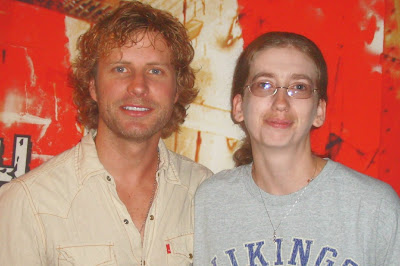 I went back to my seat then, after a quick stop at the merchandise stand. (all my friends asked me to get them shirts--I felt like a pack mule!) I was glad that I got back before the start of the concert, so I got to see all of Jimmy Wayne's set. He was really good. He played for about 30 minutes.

And then it was time for Dierks! He played for about 45 minutes, mostly the big hits, Sideways, CALC, WWIT, Settle For A Slowdown, My Last Name just to name a few. It was too short, but AMAZING! Brad went on then, and his show was really great too. We had to leave a little early, hubbie had to work early the next morning, but the whole night was really great.

Another awesome night in my life thanks to Dierks!