Texas DB Congress rep, Connie, was excited to share her Dierks experience with us:

Well it was a rainy week in Texas, and I had concert tickets to see Mr. Dierks Bentley in Dallas on Saturday September 12. It was only a 2 hour drive, plus I had a M&G so I was going to be there rain or shine. I had an extra ticket to the show and Penny wanted to go, so I told her she could have the ticket.

The drive seemed long--it was raining non-stop the whole way. We finally made it to the venue, and for some reason the lady let me park in the parking lot back where the buses were and told us how to get to the will call. As we pulled in, we saw the green machine (Dierks' jeep), and I was no longer wondering WWIT (what was I thinkin') for driving up here in this weather!

We could hear Brad singing W2TF during sound check, as we were walking to will call. The guy said he didn't have the tickets or passes to check the other side so we walked to the other side but it wasn't even open so we asked a lady and she told us to check the other side. I explained I had just left that side and he told me to come over here and that I just wanted to get pointed in the right direction so I could get out of the rain, because the wind kept messing up my umbrella! Why does it seem like every show nobody knows what's going on?

I headed back to the first will call and the guy told us to come back in a hour. We told him thanks and headed for lunch. After lunch we headed back to the venue and picked up the tickets, and waited for the doors to open. The parking lot was filling up and the guys were starting to get in line for the grass seats. Lucky for us our seats were covered. There was a bar that opened before the venue so we went in and soon after they told us we could head into the venue.

Penny headed to the radio stations to fill out for a Meet & Greet, while I sat by and talked to the stations about concerts and they loved my "Who the hell is Dierks Bentley" T-shirt.

It was time for me to head to the fan club M&G so I left Penny and she stayed there by the radio station tent. As soon as I walked away I got a call from Penny. She said, "I just got a hug from Dierks, he was talking to the radio stations!" I was happy for her that she got to see him, because she didn't win a M&G, but she was happy that she got to see and say hi to him.

Big 96.3 radio posted this video of Brad, Dierks and Jimmy interviews. Dierks is at the 4 minute mark.

I went and lined up with the other people for the M&G. We were all there early so Brittany said ok lets get out of the rain. We all went into the room and she went over how it was going to go. Everyone was to put everything on the table except the one thing you wanted him to sign, and your camera. I handed out the Congress stickers from Alicia.

As we waited we all talked about Twitter, and I mentioned Brad had posted one that said Dierks was bald. She said she hadn't seen it. She said we should have seen the one Dierks wouldn't let her post. I said "Awww...just post it next time!" Someone made a comment about the towel sharing and we all laughed. Then one girl looks around and says "Question--why is nobody wearing a white tank top?" and everyone said "uhhh...its raining." Someone also mentioned getting beer at the M&G. Brittany said, "You'll have to talk to your president about that, but I'm sure it would up your fan club fees."

I was a little nervous about my M&G this time thinking Dierks is probably like, 'I'm tired of seeing this girl.' But Dierks walked in and everyone lined up and started taking pics. One person had a Magazine for him to sign. He said, "I can tell this is old 'cause my name is in all caps and Taylor Swift's is lower case."

It was my turn for my picture. I smiled and gave him a hug. My plan was to tell him, "Whenever you get tired of seeing me let me know," and to thank him for his time during the M&G because I know he doesn't have to spend that time talking with us, because of a past M&G experience that I had with another artist. But instead I said, "Thanks for the beer and popcorn in Ft. Hood, that was the first beer I ever drank!" He laughed. He also asked if we had any signs to hold up and I told him we didn't because our seats were too far back. He asked where our seats were, I told him and said next show I would definitely have some signs. 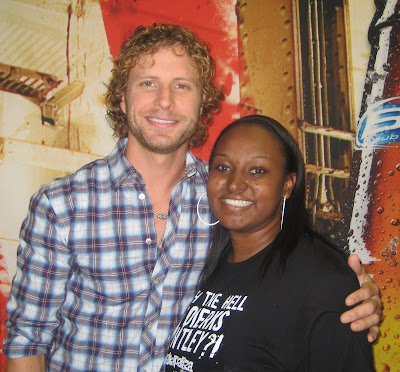 We lined up for a group photo, and he did Q&A and I told him I was ready for him to headline & pit section!!! A lady asked how long they played for, he said "50 minutes." She asked 15 mins? He said, "Yes, I sing like this," and starting singing really fast and then told her 50 minutess again. The M&G was over and everyone got their last hug. When I got mine, he said "Always good to see you," which made me feel a little better about filling out for a m&g again (fan club allows 2 per year now), and I told him next time I would have signs.

I headed out to my seat, my poor concert ticket was falling apart from the rain. I told the guy it's falling apart so he took out the flashlight to read where my seat was. I went to my seat as Penny & I waited for the show to start. First Jimmy Wayne came on and I knew a couple of his songs, plus he sang "Sara Smile." I think he said that was his next single. I only knew that song from the oldies station.

Next it was time for Dierks. He came out to SIDEWAYSSS -- lots of energy and running around as always. Songs included in no particular order What Was I Thinking, Free and Easy, My Last Name, Lot of Leavin Left To do, Settle for a Slowdown, How Am I Doin, Every Mile A Memory, Feel That Fire, Come A Little Closer (I know I am missing some probably). Even though we were on row R we stood up singing and screaming the whole show.

After Dierks' set was over, my voice was gone a little as I told the people next to us they could move down--we weren't staying for Brad. They looked at us like, What? I said, Yes, Dierks is amazing--we saw who we came to see! They asked, Are you sure? I said, Positive! They thanked us and moved down! In the end it was a great show, and amazing M&G as always, but you guys already know that!

Can't wait to do it again! Every Mile a Memory!