ONE OF THE LUCKY FEW FEELS PRIVILEGED

September 11th was a day of remembrance for America. It was also a special day for DB Congress New Mexico rep, Kristin (krisweir521). That's the day she found out she won a Meet and Greet with Dierks Bentley.

"Six days before the concert scheduled for September 17th in Albuquerque, New Mexico, I received an email telling me I had won a meet and greet with Dierks and I immediately texted everyone I know to tell them. I waited about 3 weeks from the day I applied on his website, to find out I got it--longest three weeks of my life! I had only seen Dierks in concert one other time in 2008 when he came through New Mexico on his Throttle Wide Open tour. I had front row seats and had the best concert experience of my life! I had joined his fan club the week prior to that concert, but had no idea I could apply for a meet and greet. So, this time around I was not going to let the chance to meet him pass me by."

Kristin and her girls Dierks'd out their car for the Albuquerque DRT: 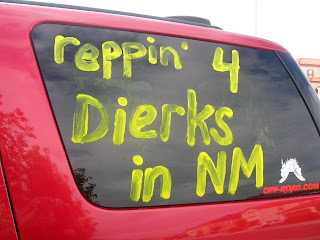 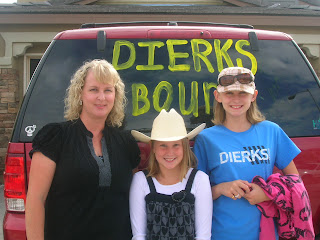 "Fast forward to this year and the Brad Paisley American Saturday Night tour. At the venue, the other fan club members and I, nine of us in total, met up with Brittany, his tour assistant, and anxiously awaited our turn to be taken back to the outdoor tent. She told us we were allowed to take our cameras and one item that he would sign. I chose to have him sign the insert of my Long Trip Alone cd because it is my favorite album. I was the last person in line. I kinda planned it that way, figuring I might get an extra minute or two alone with him.

When it was my turn, I handed my camera to the person taking the picture and Dierks immediately welcomed me with open arms. He asked my name and then immediately noticed my necklace and made a comment about it. My necklace is his signature guitar pick that I asked, well ok I begged, him for at the previous concert I attended. During his acoustic set I caught eye contact with him and asked him if I could have his pick. When he finished his set he leaned down and handed it to me. Heaven! So I had a hole drilled into it and put it on a chain around my neck. While he was signing my cd cover I told him the story of how I acquired his guitar pick and also mentioned that I follow him on Twitter and loved his frequent updates and pictures. 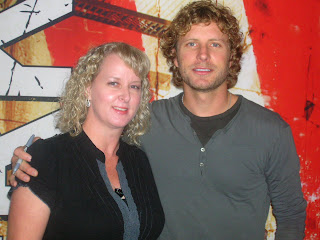 After we took our photo, the other fan club members and I gathered around to ask him a few questions. I asked him if he's been doing any songwriting and he said "Of course, I'm always writing." After a few other questions, I realized our time together was coming to an end. He took the time to thank us for spending our hard-earned money to join his fan club and individually hugged and thanked each of us for coming to see him. I had so much more I wanted to ask him and talk to him about, but Brittany was bringing in other fans to meet him.

As I was gathering my things, I quickly asked him if he usually gave out his guitar pick to fans and he said "No, not unless someone asks for it, then I will." I said "Ok, I was just wondering if I was one of the lucky few." He said "yeah, you are." Of course, I left the backstage area with a huge grin on my face!

The concert was amazing! I have to say though, when he is not the headliner you feel a little ripped off because he does not get nearly enough time on stage. Don't get me wrong, I loved every minute of his performance, but I look forward to him headlining his own show again. I need a much bigger dose of Dierks to get me through! I'm now trying to figure out how I can make it to another show before year's end.

Meeting Dierks was an experience of a lifetime and I hope I get another opportunity to meet him in person. I will be a fan for life. There are many other talented country musicians in addition to him, but by far Dierks is my all-time favorite and I will continue to promote him and his music to anyone who will listen to me.

I feel it's a privilege to be a member of the DB Congress and love that there is an entire community that feels the exact same way about Dierks as I do.

Take care and thanks for the opportunity to share my story with you and other fan club members."