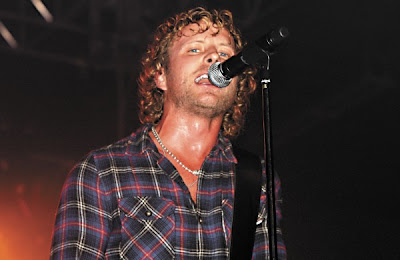 When Dierks Bentley strolled on stage in front of a sold out Alfond Arena, he asked the audience a simple question: “Have you worked hard all week? Is it time to play?” Judging by the deafening response from the crowd, the answer was clear.

Bentley was referencing his hit song, “Sideways,” which, like many country songs, is all about having a good time. For country fans, Bentley’s honky-tonk romp was probably the second-best way imaginable to ring in the weekend, just behind a cold beer, which surely many crowd members enjoyed after the show.

The record-breaking crowd formed a human sea dotted with NASCAR logos, white tank tops and gaudy cowboy hats. Fans poured out of every small town across Maine, where the simplicity of country music still speaks to the simplicity of life.

“I’m from ‘The County,’ way up in Aroostook County, and country is very big up there,” said concert attendee Emilee Currie. “We’re always listening to the country radio station way out on the field roads.”

The lyrics in opener Josh Thompson’s songs embodied the country attitude that hung heavy in the stadium. He sang songs about the Bible, guns and John Deere. He lamented getting older in his song “Growing Up Is Getting Old,” and praised the simple pleasures of life in his song, “Beer on the Table.” His one-dimensional song structure grew a little tiresome, but the simplicity of country music is perhaps what gives it such pervasive draw.

Dierks was able to explode within the simplistic form of country music. From the moment he stepped on stage, the Alfond was electric. Bentley bounded around the entire time, running out on the catwalk and jumping on top of the monitors. His back-up band was extremely talented and he gave them plenty of room to showcase their skills. Two huge video screens were on either side of the grandiose stage, displaying images and videos throughout the set.

“[The concert] was fun, energetic,” said attendee Andy Shorey after the show. “He had us all standing the whole time. He just does what he does, all the time.”

Dierks sang songs that the audience could relate to and they sang right along. He sang about love in his song “Every Mile a Memory,” about good times in “Sideways,” and about chasing girls in “What Was I Thinking.”

It may have been hard for some to find sympathy for him during his songs about heartbreak — his handsome looks could have gotten him any enticing young lady in the place. Every girl, and probably some guys too, couldn’t help but swoon as his curly, golden locks bounced up and down while he strummed his guitar. And he certainly didn’t pass up the chance to flirt with the lucky ladies in the front row.

Dierks was enjoying himself just as much as the audience. “Personally,” he said as the lights came down for a sparse acoustic portion of the show, “personally I think this kicks a–.”

He told the audience about skating with the UMaine hockey team earlier that day and pulled out a jersey with his name on it — easily the highlight of the night.

“He’s a huge hockey player, and the fact that he got to go skating with the [Black] Bears — he hadn’t skated in two months — he loved it,” Mehdizadegan said. The athletic department’s cooperation with the event helped make everything run very smoothly, according to Mehdizadegan.

For Mehdizadegan, the success of the show went far beyond what happened on stage. He said the help from his team of volunteers and Bentley’s staff made for a perfect concert experience.

“I think — and I can say this with a lot of confidence — that this show was absolutely flawless,” said Mehdizadegan. “I think people enjoyed it because he’s a great performer. He’s pretty mainstream when it comes to country. He’s not too niche based. Student Entertainment has never done country and when I came into the job, I knew I wanted to do different genres.”