DIERKS IN A DIFFERENT LEAGUE

The first time I saw Dierks in concert was when he came to Oklahoma City with George Strait, Halloween seven years ago. It was when "What Was I Thinking" was brand new. He sang and I thought "Hey this guy has a really unique voice. He's prety good." So I started following him.

Modern Day Drifter is my favorite CD, not that I don't love "Long Trip Alone" and "Feel That Fire", but MDD is the one that got me completely hooked on Dierks' music. "Settle For A Slow Down" is hands down my favorite Dierks song!

In July we went to see him at Chaos At The Cove in Eufaula, OK. It was no less than one hundred degrees and we were packed like sardines in front of the stage. We were all sweaty and people were slinging beer so we were covered in that too. So aside from the heat, sweat, beer and hot bodies it was the craziest, funnest concern I'd seen yet.

I came back to work Monday still totally jazzed up from the weekend. So I got on Dierks' website and saw a new concert was posted for Norman, just down the road, so I called and bought tickets. After my incredible experience at Eufaula I didn't see how I'd ever be able to go to another Dierks concert sitting out rows away from the stage. So I thought if I joined the fan club I'd get better seats. So I joined and signed up for the Norman Meet and Greet. When I receieved the email informing me I'd been chosen, I nearly cried. It was fantastic.

So I arrived at Riverwind Casino last Thursday and picked up my M&G pass. I was the first one in line to meet Dierks. We walked into the back room and there he was finishing up pics with the previous group. They had me stand like three feet away to wait my turn. I really don't get nervous much, but standing three feet away from Dierks Bentley is intimidating!

He finally looked at me and asked if I'd been caught in the rain. I had been at the casino since 5:45 waiting for the M&G and it was now 7:30 so I had no idea it had even been raining so I stuttered a minute trying to think of something more intelligent than that and finally settled on "I didn't even know it was raining. I've been waiting for the M&G." He laughed and said "Well did you do some gambling?" I said "Just a little but I didn't win." I don't think I really scored any WOW points but I didn't make a COMPLETE fool of myself. 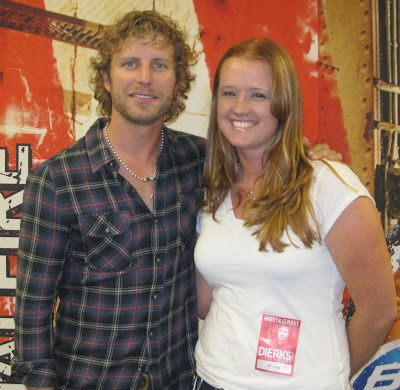 So we get our picture taken and I start to walk away and he says, "Do you have something for me to sign?" Of course I did, I was just scatterbrained. I said "Yeah sorry, I'm new." and laughed. He was really nice and probably very used to dealing with star struck fans so he handled it great. He signed my CD and I stood aside and took a dozen more pics of him signing autographs and taking pictures. He gathered us all up and thanked us for being in the fan club and answered our questions. I never quite worked my nerve up for another question but NEXT time hopefully I'll do better.

He was just a nice, normal guy. I enjoyed getting to meet him. I will sign up for every meet and greet that comes through Oklahoma. No matter what I'll keep buying his music and going to every single concert I can. His voice and his music belong in a league of their own and I hope he knows how much his fans support him.

Needless to say the concert was great. My sister and I never sat down. We spent the whole two hours on our feet screaming, singing, cheering, dancing, clapping and more screaming. As usual he blew us away. Neither my sister or I had much of a voice left but that's a small price to pay to get to see Dierks up close and doing what he does best. Thanks a lot.