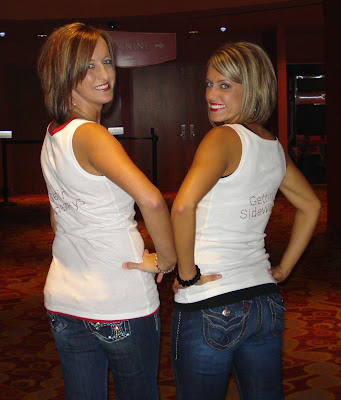 After loving Dierks Bentley for years and finally dragging 3 of my friends to see him in Eufaula, OK on July 3, 2009 in 100+ degree temps for 6 hours, I was hooked and had to join the fan club--as did my friend Angela.

Then, we realized that DB was coming to Riverwind Casino, so we bought our tickets ( third row) and signed up for our Meet and Greets! We also had special white tank tops made.

I got a M & G, but Angela didn't. Of course, she was upset. We arrived at Riverwind about 5 pm and as we walked by the buses we of course had to snap a few pics. The green machine was there. (Dierks' Jeep).

Just as we passed the buses, we noticed the "backstage" doors just in time to see Chris (Tour Manager) come out. Dierks was doing sound check. So, we ventured into the casino and picked up my M & G and snapped a few more pics. We were getting lots of compliments on our tanks!

So, about 30 minutes later we ventured back outside and no one was there except a couple security guards, so, one of them told us to hold on a minute (apparently the second guard told Dierks that we were waiting for him) and Dierks came out and told us to come over. So, we all introduced ourselves and he loved our tank tops. We got a quick pic and chatted for a minute, then we let him go to his bus to get rested up and ready! Angela and her mother, Roxanne were pumped.....and freaked! 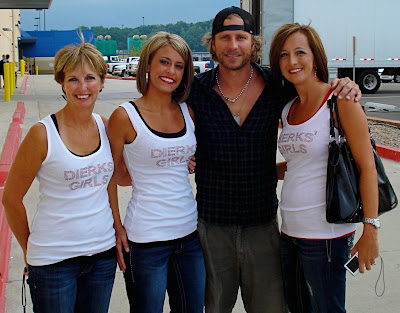 So, we go back in and eat and I met another girl from the fan club. About 7 pm they lined us up for the M & G and his tour assistant Brittany came and got us. There were other M&G's going on before and after the fan club also, like radio, casino, bud light, etc. I also saw some girls representing with their DB Congress shirts on. 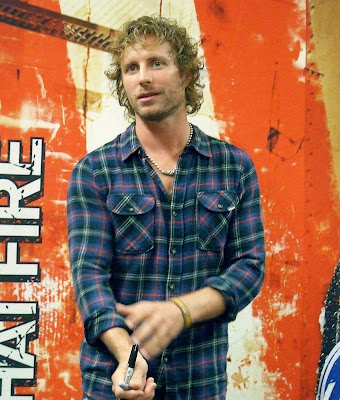 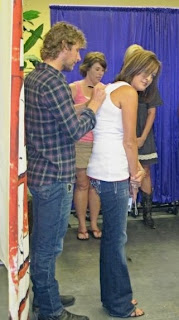 At the M & G we all got our pics taken and I got my tank signed. Dierks said it was good to see me again and told me not to worry, that he wouldn't forget about the "Dierks Girls" during the show.. He then did a Q & A. Everyone was so quiet. He said his family was doing well, and he had actually just gotten in from a few days in Phoenix, mentioned about taking off in Jan. and Feb. and working on some music and a bluegrass album, mentioned maybe doing a small venue tour in March and April and hopefully headlining next fall. He talked about a small bar in Little Rock, Arkansas with low ceilings and how he about took out a ceiling tile during a show. Then we all gathered in for the group pic. Dierks thanked us all for coming and being in his fan club, then gave us hugs! 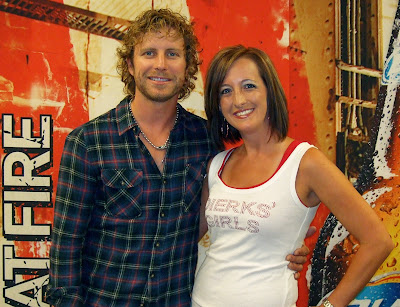 Dierks came out with Sideways and made it a point to come over to us and point out our tank tops--it was awesome and got quite a rise from the crowd! 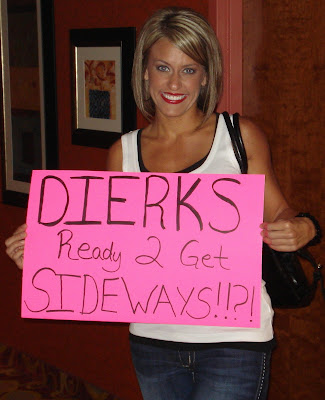 Other songs included (in no particular order): Long Trip Alone, Feel That Fire, Come A Little Closer, I Wanna Make You Close Your Eyes, Life on the Run, Better Believer (looked up and thanked God when it was over....gave me chills), What Was I Thinking, Free and Easy, My Last Name, Lot of Leavin Left To do, Settle for a Slowdown, How Am I Doin, Every Mile A Memory, and Fulson Prison Blues.

Even though we had third row seats, we didn't sit. We were up close and personal by the stage except for the 1 or 2 songs that they (security) ran us all back to our seats. That didn't last long! 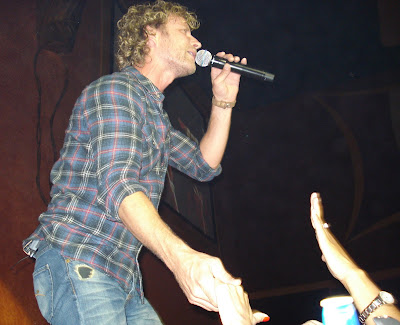 Great Show as usual and many memories! We are now looking at going to see Dierks in Vegas in December!

Here is a link to all the pictures: http://picasaweb.google.com/Karissa1977/DierksBentleyConcert#

I also shot a few videos....here is my you tube link:
http://www.youtube.com/user/Karissa1977