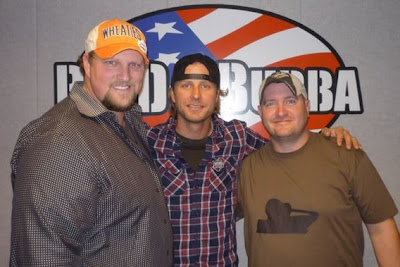 Big D and Bubba - syndicated radio show personalities - hosted Dierks Bentley on their show this morning. This is the photo and caption they posted on their Twitter page above. I heard most of the interview. They're old pals with Dierks and kept giving him a hard time about his old 1994 truck and saying they want to pimp it out for him. Dierks never gave in, saying that was his dad's truck that he gave Dierks to come to Nashville 15 years ago and it's still going strong. Dierk talked about someone stealing the radio out of the truck--dash and all--and how he just has a cheap $100 player in there right now, and only one speaker on the right. Big D and Bubba joked about being the tweeter and the woofer. Then one of them said his wife called the station one day and asked "have you heard Dierks' new song?" he said, yeah the beginning and the end, she said you gotta listen to the whole thing (I Wanna Make You Close Your Eyes). I think Bubba got lucky that night, cos he thanked Dierks for that song!
Posted by DB Congress at 9:08 PM