DIERKS: PERFORMANCE OF THE YEAR 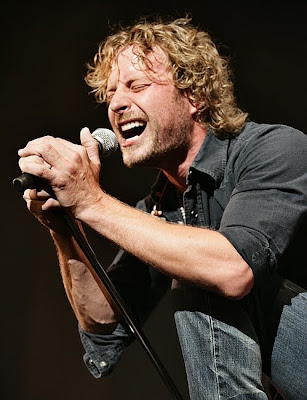 Here's an interesting article from a photographer Rebecca DeVaney (not to mention a totally AWESOME photo to the left!).

Dierks Bentley: Catch the performance of the year

Two time platinum album certified country music artist Dierks Bentley is currently touring the nation with Brad Paisley. Dierks Bentley’s name alone isn’t the only unique aspect to his country music successes. He was raised in Phoenix, Arizona and Lawrenceville, New Jersey – two places that aren’t exactly regarded as country music hubs. Yet, listening to him perform live, one would assume that Dierks was born and raised on a Nashville with a guitar at his side. CMT would concur. They awarded Dierks with the Performance of the Year Award for 2009 [For the quartet of Country Boy with Alan Jackson, Brad Paisley and George Strait--have you ever seen Dierks smile so big before?]. 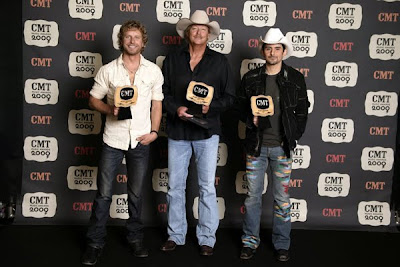 This casually dressed star is an unassuming subject to capture on stage with no cowboy hat or headset microphone obstructing his face. Dierks likes to get up-close and personal with the audience, as well as the cameramen. When covering Dierks for your publication, you can expect plenty of ten-feet opportunities, so leave your long range lenses at the studio. Do prepare your cameras in advance for action as Dierks tends to bounce around the stage non-stop. It would be a shame to catch a motion blur when covering the Performance of the Year!
Posted by DB Congress at 12:19 AM

Email ThisBlogThis!Share to TwitterShare to FacebookShare to Pinterest
Labels: Dierks Bentley, Performance of the Year