@DierksBentley: just finished soundchecking for the all for the hall gig...I have two really cool gtr plyrs in my band...!
3:22 PM Oct 13th from TwitterBerry

When I first read that Tweet, I thought--what the heck happened to Robbie and Rod? Not to worry, just for one night Dierks borrowed legendary Vince Gill and phenomenal guitarist and host for the night, Keith Urban to play and sing back up to Bentley's Sideways and Free and Easy. After all, it was all for the hall. 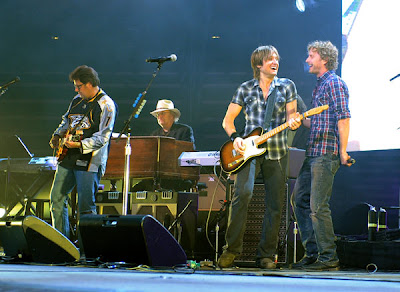 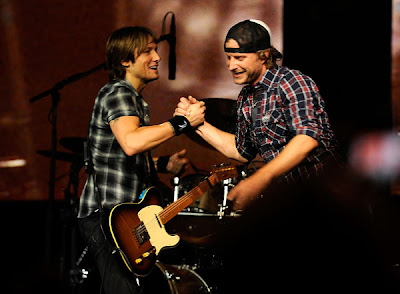 The sold out "We're All For The Hall" benefit proceeds go to the Country Music Hall of Fame and Museum. The show is part of the museum's "All for the Hall" fundraising initiative created and led by Gill since 2005.

CMT posted an article and photos from the night including host Keith Urban, Jason Aldean, Dierks Bentley, Vince Gill, Faith Hill, Lady Antebellum, Little Big Town, Brad Paisley and Taylor Swift. It was Vcast online for those who weren't able to get tickets.

After the show, Dierks tweeted again:

@dierksBentley: all for the hall!...thanks for the fun...miss my band. headed to station inn for a tv thing and some bluegrass! #fb
about 22 hours ago from TwitterBerry