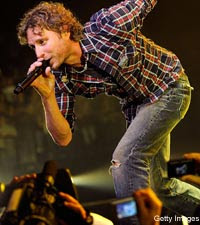 Dierks Bentley definitely bonded with the audience at his Madison Square Garden gig this week -- maybe a little too well with one member of the audience, in fact! Opening for Brad Paisley on his American Saturday Night tour, Dierks bantered back and forth with the crowd. According to the Village Voice, Dierks called out a random concertgoer from the stage and struck up a conversation with him. Sticking his microphone in the man's face, Dierks suggested they go see a movie together. "Two dudes can hang out," Dierks professed to the crowd -- as he began to name a few of his favorite "guy" flicks."You ever see 'Old School," 'Anchorman,' 'The Hangover' ... 'I Love You Man?'" Dierks asked the now fully engaged fan, to which the guy quickly answered back, 'I love you, too!" The dry-witted Dierks deadpanned., "I was talking about the movie," after which, the budding bromance came to an abrupt end.Dierks will be sharing some love -- and compassion -- with his hometown of Phoenix on Nov. 21, That's when when he takes his Miles and Music For Kids celebrity motorcycle ride and concert on the road to raise money for the Phoenix Children's Hospital. The fundraising effort has been expanded to six cities across the country for 2009-2010, with proceeds going to Children's Miracle Network hospitals in those areas.
Posted by DB Congress at 11:14 PM