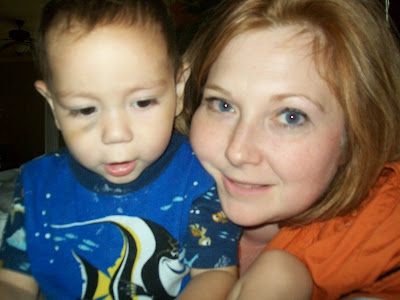 A little about me...I'm a single Mom to the cutest little boy (Adam) who loves to rock out to Dierks in the car. Although he's deaf and wears hearing aids, he still jams out to "Sideways!"

What is your favorite Dierks Bentley song? That's a toss up between "Close Your Eyes" and "Come a Little Closer". HOWEVER, yesterday "The Heaven I'm Headed To" really hit home and was something I needed to hear.

What is your favorite Dierks Bentley album? I think it is the Greatest Hits/Every Mile a Memory because all of my favorite songs are on that cd except "I Wanna Make You Close Your Eyes."

What is your favorite Dierks Bentley music video? Now THAT is a hard question... I love all his videos, but I'd have to say "I Wanna Make You Close Your Eyes."

What led you to be a fan? He reminded me of a friend of mine in a way and that's what started my attraction. Since then, I've just gotten into him and I LOVE his music! I got the chance to see him in concert in 2006 as an opening act for Kenny Chesney. I left the show shortly after KC got on stage because I was there to see Dierks. (and my mom was there to see Sugarland-- after that nothing else mattered!)

How do you promote Dierks Bentley? I have bought all his cd's and I even have the RockBand Country pack with his music on it! I am taking a friend to see Dierks in concert next month here in Lexington. I play his music everywhere, and I'm teaching Adam (my 18 month old son) to say "I'm With the Band" LOL! I've followed Dierks' career for a few years, even when I wasn't into Country Music as a whole, but I still stayed on top of what he was doing. He's the only 'star' I've ever joined their fan club, and the only one I've seen more than once in concert.

I have several good life memories tied to his music. One memory that I can think of was to "What Was I Thinking." My little brother and myself sitting at the ATM pushing in the wrong code for his card and both of us singing that song. I remember him asking me what it meant "hood sliding like Bo Duke" (he's MUCH younger than me and was clueless). Dierks is the ONE performer that my brother and I still agree on to this day, which makes long car trips much easier!


Have a great weekend!

Email ThisBlogThis!Share to TwitterShare to FacebookShare to Pinterest
Labels: DBC Member of the Week, Kentucky, Shon82573