Two of our DB Congress members, representing California, won Meet and Greets before the San Diego show October 2. Notice Dierks is wearing a "Spiritual Gangster" shirt. That's new and different from the plaid or plain T's! I hope you enjoy both experiences from Janet and Stephanie below!

JanetM:
Friday, it's been hot here and today it started to get cloudy, humid and then rain. Oh No! It hasn't rained since February you see, and this is fire country. So we are thrilled for the rain and crushed that it decided to do it the one day Dierks is in town playing in an outdoor amphitheater. Cricket Wireless Amp. is about 10 miles from the Mexican border, in an area that used to be the middle of nowhere, but is surely becoming part of the Chula Vista suburbs. Pretty rolling hills that look a littler greener today. The rain off and on stops about 4:30 as I drove in. I was a tailgate party of one, with my Dierks Flag sticking out the sun roof of the car. 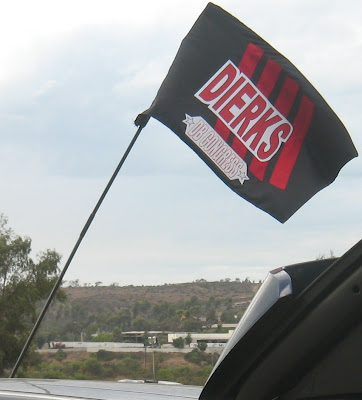 So I sat in the back end facing the Amphitheater and listened to Dierks do sound check. Sound check started 3 hours late, so that backed us all up in getting in. While waiting, I handed out business cards to the locals to join Dierks.com and made new friends in the fan club, all wearing their Meet & Greet passes. We congregated to the side of the stage and Brittany finally let us go back.

We stood there in a circle until Dierks arrived. He took alot of time, wasn't rushed and talked to everyone, took pictures and then talked about coming to San Diego as a kid for the summers (that Zoni). [Zonis come every summer and on Labor Day, us natives take the place back.] He talked about being here for a vacation early one morning and he & Cass were walking on the beach when he was approached by a guy with a video camera. "Oh no," groans Cass. Dierks says the guy just asked him about how he liked the weather and asked him his name. No recognition. Dierks just laughed. 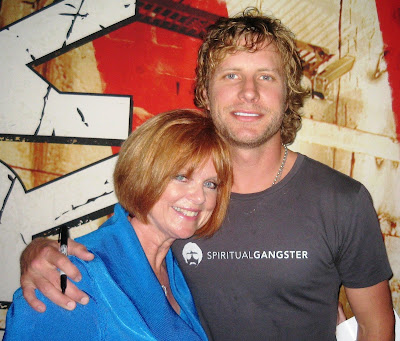 We told him that NBC had played 'Sideways' on the morning show two days ago. Fely, who works for NBC San Diego was in the crowd and she was responsible for it. "Jason pronounced your name right," I said. "Really?" Dierks replied. Finally, we had to go. He still was going to see the people the radio stations had lined up for him and wanted us to see Jimmy Wayne's set.

Dierks hit the stage singing Sideways, running, sliding, hitting all three platforms. He ventured up the stairs into the crowd at one point. After Sideways, he talked to the crowd and mentioned that the last time he was in town it was a little different venue - the Casbah Bar. Funny, since that's what we talked about in the M&G. If I was really good, I'd remember all the songs he sang, but I was too busy living the moment. 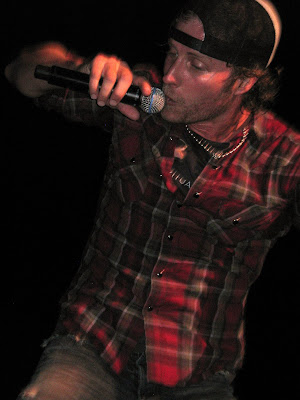 During So So Long he walked down (ran) the center aisle looking at the crowd. I was three people from the end of the row at the end of the ramp. He pointed at me and waited until I got to the edge of the stage, grabbed my hand and spun me around. Now you have to understand that the stage is over my head by about a half a foot, I am tripping on the stage equipment, and I get caught and can't whip around. Okay, sadly there is someone who dances even worse than Dierks. He thinks it's funny too and is laughing while he's singing as he lets me go. He sits down at the end of the stage sticks the mic in a girl's face and says "what's your name?" She answers and he says "Nice to meet you, but I have to go back to work now," rolls back and continues to sing So So Long. So much for multi-tasking!

At the end when as he was getting ready to sing 'What Was I Thinking" he sits at the edge of the stage and asked someone if they watched a Will Ferrell movie. The girl had no clue. So I suspect everyone today is trying to figure out the Ron Burgundy references. Nice try Dierks! Last song was Free and Easy. It was over way, way, too quickly. How I love to watch him sing!

Stephanie (beaglefan21)
A few months before the show, I saw the San Diego show was right next to Evie's first bithday. So I got the idea she needed a birthday card! I told my friends on dierksfan.com and let everyone sign up for their name on the card. Some just gave their name, some had screen names and where they where from. I added them all the day before the show and wrapped it up and could not wait to give him the card. I could not wait for that!

The day got going when my friend Ivory and I left around three for the show at seven thirty and we had Dierks playing all the way there! We picked up my meet and greet pass and turned around to see none other then fellow DBC'r JANET! We said our hi's and how are yous then we waited for a bit for them to let us in! Then we found the meet and greet area and waited a bit talking to few people around me. Jimmy Wayne fans went in first and we had to wait until he was done before we went in.

As we walked in, Jimmy walked out! We all said hi but he just went on walking. But as we waited I was near a few girls who where just the 'lets-get-a-meet-and-greet-never-get-on-the-board fans.' They called me crazy knowing so much about DB and about the card I got for Evie. But I did not care--I was happy I knew so much about him and happy for the card. But no matter what if you are a big fan, knowing all about him, if you pass out stickers or run a site for him, or just go to his show you are his fan!

So once we got in the area, that was pretty dark and there was Dierks' background thing and Brad's across from his. Eveveryone was taking pictures of it so i did too, but it looks much better with DB in front of it! Once he was there was when the nerves hit! My heart was going crazy and I watched as one after another met Dierks--one girl giving him a coffee cup even!

But before I knew it, I was up! It was so great--right off he went for a hug and smiled and said, "You've been to my shows before I've seen you!" Aw...it had been a year since I last saw him at the Knitting Factory, and three years since I last met him. But he said, "Yeah, I remember you from here when I said this was where I last met him. I gave him the card saying it was for Evie from me and some of his fans. He said thanks and how her birthday was in two days. He put it in his pocket and I am sure he looked at it later. There was much more I wanted to tell him about the card and how dierksfans.com was on it, but you know you can't waste time. Inside, the card said, "wishes to you for a day of birthday fun!" 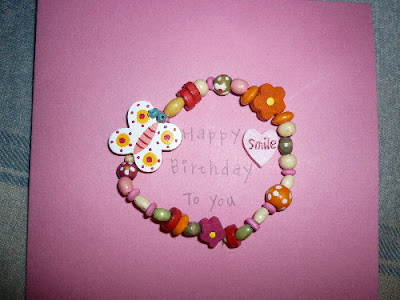 I wished I could have told him I got him a fan from Indonesia to join the DB Congress, but time ran out. Maybe next time right? I had the Country Weekly--the one with just him on the cover. He signed it, 'Love ya, Dierks.' Then another hug, and I went and waited at the side until everyone else met him. 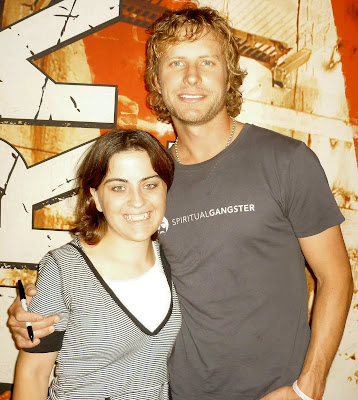 Then we all got to get close to him and talked about his favorite Mexican food, and how he was walking on the beach with Cassie when some news guy did an interview with him but he had no idea who Dierks was. He was sweet and we talked for a little bit. Then it was time for the group shot. I always told myself get near the middle in front of Dierks--and I got it! Right in the middle! And soon I felt his hand on my shoulder. It was great--that made me happy! Then sadly he had more to meet and we had to go. We said good bye, and good luck and it was time for the show.

Jimmy got everyone going and Dierks rocked it! He made jokes, sang his songs perfectly and looked great. Brad came out at the end and he did great too! The last song when Brad, Jimmy and Dierks sang, it was perfect. There was even some "surfing!" What a great night!

Thanks, ladies, for sharing your Dierks stories!