Ashland, Kentucky native Tim Sergent is a talented musician, making his living on the road as Dierks Bentley's steel guitar and banjo player. And today was no exception. It's his birthday, but he worked on stage with Dierks and the guys, performing to raise money for Vanderbilt's Children's Hospital in Nashville for DB's annual Miles and Music For Kids celebrity motorcycle ride and concert. The event raised over $215,000 this year - more than double the three previous years.

My goal this year was to meet all the guys in Dierks' band. I met Tim (and Rod) in February in Tampa at another benefit--WQYK for St. Jude's. Tim and Rod were supporting Dierks in an acoustic set and in between they were just hanging out having coffee so I asked for a photo op! 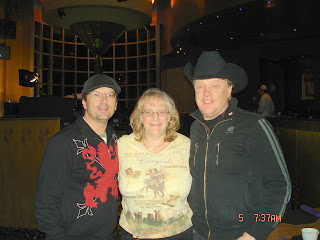 I met Tim again at Last Call Ball and also chatted a few minutes with him after The Tabernacle in Atlanta. He told me he plays the fiddle some, and I told him I'm waiting to see that added to the live show! My dream would be to see "Gonna Get There Someday" live, with Dierks singing and Tim playing fiddle! 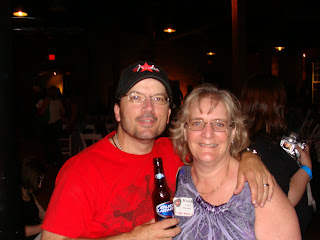 I also found a beautiful video on YouTube of Tim showing his stuff:

Tim Sergent playing one of the new Jackson steel guitars at the show at Steel Guitar Nashville January 14, 2009 posted on YouTube by bobbeseymour

Here is a comment on YT from below that video: jd774U (6 months ago) Thanks for the great video. I knew Tim back in the 80s in Ashland KY - he was a child prodigy! ﻿ He could play anything - banjo, guitar, piano, etc. and was destined for Nashville from birth. A really great guy too, i wish we had more of him on youtube! (got any more?)

Tim plays the banjo! My brother filmed and edited this video exclusively for dbcongress.com:


Posted on Youtube by dbcongress February 09, 2009: Originally scheduled to be pool-side, Dierks Bentley performed live inside Floyd's on this 32 degree Florida morning, at the Seminole Hard Rock Hotel & Casino in Tampa from 7-9 a.m. Audience members earned a seat by serving as Partners in Hope for St. Jude's Children's Hospital. WQYK broadcast the event live and Charley Belcher from FOX13 was also there filming live for tv.

HAPPY BIRTHDAY, TIM! I hope you see this and hope you had a fanstastic day! See ya Friday night in Tampa!