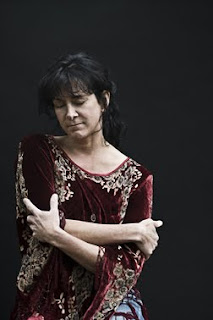 Dierks Bentley's version of "Bad Angel" is one of my favorite songs on the new "Up On The Ridge" CD. I found this article from way back in April! I am really hoping this song becomes one of the many singles that gets released to radio from this album!

"Suzi Ragsdale, whose latest two-CD set, Best Regards/Less of the Same, continues to garner airplay at Americana radio, will have one of her songs featured on multi-platinum singer Dierks Bentley's upcoming CD, Up on the Ridge, set for release on June 8 by Capitol Nashville.

"I feel like I've found the proverbial magic lamp and the genie has granted my three wishes: Dierks, Miranda and Jamey," said Ragsdale upon hearing her song for the first time as it was performed on the new CD.

At a recent advance listening party for the new CD on Nashville's Music Row, celebrated music journalist Robert Oermann declared: "The bluesy 'Bad Angel,' featuring hair-raising, triple-whammy vocals by Dierks Bentley, Miranda Lambert and Jamey Johnson, is already a contender for Vocal Collaboration of the Year, in my opinion. I never wanted it to end."