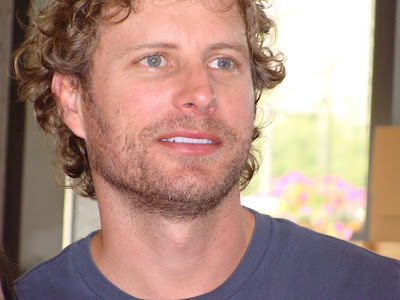 Dierks Bentley barely slept three hours Wednesday night and he was back up and signing autographs at the Country Music Hall of Fame and Museum on Thursday at 2:30 pm. After a long night at his own fan club/CD release party of posing for pics and autographing everything from boots to tatoos, he didn't head for home until around 3 am. That's when I left, too, along with many fan clubbers who also stayed to the bitter-sweet end.

While I was fortunate to get a few more hours sleep, Dierks was not so lucky. Daughter Evie had him up at 6:30 a.m. he told one of the CMHOF fans. But he wasn't complaining--he loves his little girl!

Lunch in the Sobro Grill (in the atrium of the CMHOF) was delicious! I finally met Steve Morley (CW) in person after all the support he has given Dierks and DB Congress over the last few years in the magazine. He brought me a copy hot off the press of the June 21 issue with Dierks on the cover!

Before waiting in line in The Hall's beautiful atrium, I was able to take a quick tour to see some of the new exhibits in the museum. I told my friend Keith who works there and walked me around, that I could tie just about any exhibit to Dierks. Like the first one we came to--a glass case with Jamey Johnson and Miranda Lambert memorabilia. "Did you know that Dierks has a song, Bad Angel, on his new album which both Miranda and Jamey each sing a verse along with harmonies?" Now why isn't Dierks in that exhibit or any other CMHOF exhibit? I think DB Congress reps need to send a request to The Hall to change that!

After the tour, I visited the ladies room and I was so shocked to see Dierks in there! 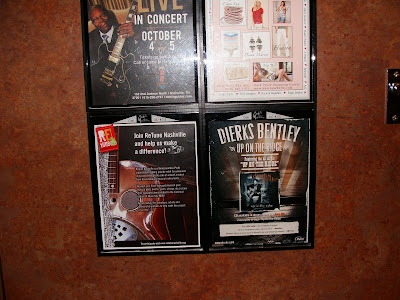 The line moved out of the atrium and into the gift shop and the whole place erupted with cheers when Dierks walked in.

When it was my turn, I handed over my voucher, but we were only allowed to have him sign the CD cover, so I was sad I couldn't bring the new Country Weekly with him on the cover.

I congratulated him for being on the cover and he asked how the picture was and something about his hair never looks good on those covers, but I said "It's a good picture--your hair was combed." He said, "I haven't had a comb in my hair in years!" When I first walked up he said it meant so much to him that we were there last night (LCB) AND also came here to the Hall of Fame. I told him I'd see him in St. Pete after the Rays game Saturday night and he said, "Oh, yeah, your home town!" How does he remember that kind of stuff?!

We took a pic--my first ever hug pic with Dierks! 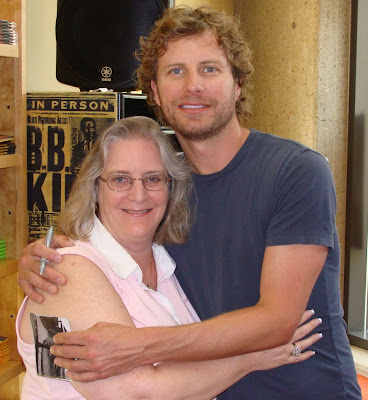 Thanks to DBC rep, Meg, here is a video of Dierks walking in to the gift shop. It's about 1:40 minutes in, after the Miranda fan club segment. You can see me in the pink shirt at about the 1:50 mark, right before they interview Tina.

Thank you CMHOF for having Dierks sign two years in a row! Let's make it a tradition every year! But in 2011, we expect to see a DB exhibit, too!