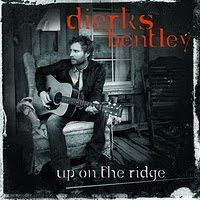 Dierks Bentley was featured on National Public Radio’s (NPR) flagship radio program All Things Considered on June 24, 2010, according to dierks.com.

Already hailed as “the best country recording we’ll hear in 2010” (Washington Post), All Things Considered followed suit, calling Bentley’s new bluegrass-influenced release UP ON THE RIDGE “timeless.” You can listen and download the segment below. Other NPR shows are lining up to feature Bentley’s newest release this summer with planned performances on Mountain Stage and eTown.

UP ON THE RIDGE continues to receive glowing reviews, recently called “sterling” by Rolling Stone and “authentic” by the Dallas Morning News.

“A significant step forward in Bentley’s evolution as a songwriter and singer.” Los Angeles Times

“Up on the Ridge comprises ambitious covers executed with modesty and respect, magnanimous co-writes and a loving attention to sonic detail; a true celebration of the state of modern country.” Paste Magazine
Posted by DB Congress at 8:25 AM