LET'S BLOW OUT THESE CITY LIGHTS...

The first line of Dierks Bentley's new single was taken literally when The Jimmy Kimmel Live studio in Los Angeles was hit with a power outage yesterday. I'm guessing Dierks had no idea that "Let's blow out these city lights" from Up On The Ridge could have caused such chaos! Jimmy didn't let the lack of lights deter him. He got out his lap top and recorded the whole program with his web cam, that is supposed to air tonight.

Dierks and the boys performed acoustically and DB used Twitter to help tell the story:

an hour later...
so...one of the craziest tv nights ever. long story short, it will air tomorrow. who knew you could shoot a late night show with a mac?! #fb

14 hours later...
the closest I'll ever come to getting "couch time" on tv. @JimmyKimmelLive 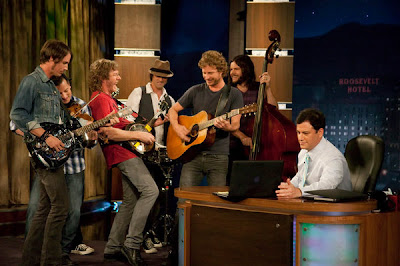