RANDY KOHRS TO DB CONGRESS: "CONSIDER ME ONE OF THE FOLD" 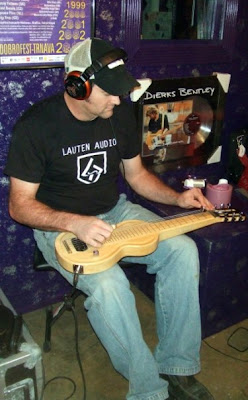 Three tracks on Dierks Bentley's new CD--Draw Me A Map, Bad Angel and Down In The Mine all have one thing in common. Any guesses? Yes, they are three of my favorites on the Up On The Ridge album, but they also all boast one common musician--singer, songwriter, musician, producer Randy Kohrs!

We've written about Randy before (remember when they had their instruments stolen?), but this time is different. He actually stumbled upon dbcongress.com and sent us an email!

"I was tracking chart positions and gathering reviews on my new CD and stumbled upon the site. Consider me one of the fold! I am proud to be on several of Dierks' CDs including the new bluegrass one too."

"I am very lucky to have 6 CD’s out. My latest being “Quicksand.” In acoustic music the fanbase is much smaller so we sell thousands instead of millions on CD’s. It is easy to get lost in the sea of press from major artists."

His new CD, “Quicksand” was the most played CD on Sirius/XM last month (acoustic) and is steadily doing well. At week two of its release, it was on 5 different genre’s charts ranging from Bluegrass, Country, Blues, Americana and Gospel.

Dierks's albums isn't enough, Randy Kohrs says his recording studio keeps him busy throughout the week. "I produce other artists like Jim Lauderdale and recently Blue Moon Rising, more than I travel anymore," he told me, although he did make two appearances at the CMA Music Fest.

Randy says he and Dierks have been good friends and played together at least once week way before Dierks ever signed a publishing deal and that he's glad to see Dierks doing well.

You can check out The Randy Kohrs Band on The Grand Ole Opry Friday night, June 25 (Randy's birthday!) Listen on line at wsmonline.com or 650 AM. Song samples are available on randykohrs.com. I can't wait to hear the entire Quicksand CD!

Oh, and next time you listen to Down In The Mine, think of Randy when you hear the sweet sound of the Weissenborn! That's him!
Posted by DB Congress at 9:11 PM