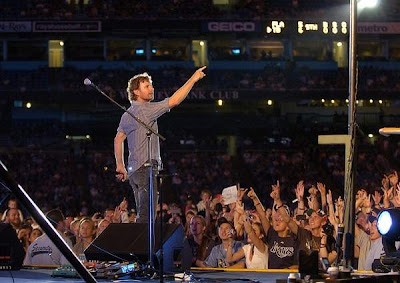 Dierks Bentley performed after the Tampa Bay Rays game on June 12. I was lucky to be there in person at Tropicana Field. This is the show that did not have a Fan Club Meet & Greet (although we saw about 100 radio winners get to meet Dierks).

Fellow DB Congress rep Ann was interviewed and the Herald Tribune quoted her in this article (excerpt below):

The Rays are averaging about 22,000 fans a game this season -- one of the lowest in the majors. But when there's a concert on a Saturday night, the 36,000-seat Trop often fills to the brim. And it gets loud.

Take June 12, for example. It was "Country Night," with Dierks Bentley.

The Rays warmed up the crowd of 29,963 with a 6-5 win over the Florida Marlins. Then fans -- many of whom stuck around after the final out -- got to "Come a Little Closer" to Bentley.

"Sometimes these acts don't play to more than 10,000 people," says Brian Killingsworth, senior director of marketing for the Rays. "Here, they get to play to up to 30,000. It's great exposure for them, and it's even better for the fans."

The concert series has come a long way since 2008, when it featured mostly oldies acts, such as The Commodores, Loverboy and MC Hammer. (Bradenton's We the Kings were the only newcomers to play that year.) It proved to be a winning combination: The Rays went 8-0 during the concert series, and attendance went through the domed roof.

As word spread of the series' success, the Rays were able to attract bigger names. In 2009, the lineup included The Beach Boys, The B-52's, Ludacris, Flo Rida and Daughtry.

"Daughtry was an example of where everything went perfect," Rossi says. "He put on a killer show, and even the players were excited about it. (All-Star third baseman) Evan Longoria, who's not very excitable, was like a schoolkid. He went to Daughtry's dressing room before the game to get his autograph."

Fans are eating it up.

They begin lining up during the sixth inning near the outfield exits. About 5,000 are allowed on the field; others stay in their seats or move closer. When the game ends, they sprint from each side of the field to the centerfield stage.

"I drove here two hours just to see Dierks," says Ann Martin of Altamonte Springs. "I've seen him 19 times -- even went to Nashville to watch him get inducted into the Grand Ole Opry."

After three years of post-game concerts, the Rays and Ruth Eckerd Hall crews are a well-oiled machine. From a garage behind centerfield, they anxiously watch the final outs on a TV.

"The last two outs, I really get into a zone," says Kevin Stone, entertainment manager for Ruth Eckerd Hall, as he paces near the 24-by-35-foot rolling stage.

Reliever Rafael Soriano makes the last out, the crowd roars, the lights go down, and Stone yells "Let's roll!" to his staff.

Some of the 30-man crew wheel open the outfield doors; a Rays Hummer emerges, quickly parking in front of the stage. Workers hitch it, and the Hummer slowly rolls the stage to the middle of the field.

Meanwhile, fans stream in from both sides. A forklift delivers the mixing board; workers roll out the speakers, some of which will be raised high above the stage for optimum sound. Technicians make a quick sound check for guitars and mics.

All told, it takes about 25 minutes to get everything in place. Once they're finished, they're forced to wait on the star.

Five minutes later, Bentley strolls onto the field with his band mates. They huddle behind the stage for a pep talk from Bentley. They join hands, and Bentley shouts "Let's get tropical!"

The band rushes to the stage, and Bentley waits alone backstage.

"I've played to crowds this big before," he says, "but I still get nervous. This is such a big deal for us."

It's a big deal to fans, too. They relish the relaxed atmosphere; many crowd the stage, others sit on the field, some dance. Few leave.

A perfect ending to a perfect evening.
Posted by DB Congress at 2:32 PM