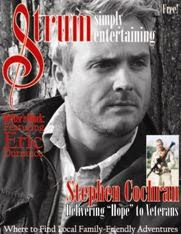 A few weeks before Dierks Bentley's Last Call Ball 6, I received an email from Rick Amburgey of strummagazine.com interested in attending LCB and interviewing Dierks. I referred him to info@dierks.com. Long story short, he was not able to attend, but decided to do a pre-story to promote the event. He asked me some questions and the story below is the result. Sorry I didn't post prior to LCB, but I just found it!

Dierks Bentley will hold the Last Call Ball again on June 9, but it’s going to be more than just another fan club party. That’s because this year’s event will also double as a CD release party for his new CD, “Up On The Ridge.” It’s not just limited to members of his fan club and everyone who purchases a $25 ticket to the event, which will be held at Limelight, will receive a copy of the CD.

Ronna Clark, of Brandon, Florida, is the DB Fan Congress chair, which Clark describes as similar to Bentley’s street team. She started DB Congress and said it’s grown from six members to 600 in three years. It was originally started to help promote Bentley and his music.

“Around 2007, “Long Trip Alone” the song was on the CMT Top 20 video countdown, and about half a dozen of us fan club members were voting daily on cmt.com to try to get it to move up to the #1 spot,” she said. “But that was not nearly enough people, and I realized it was going to take an “act of congress” to get the video to # 1 (which we accomplished for three consecutive weeks.)” Clark said the name of the DB Congress was actually inspired by a quote Dierks gave in a 2006 interview.

Clark said the Last Call Ball is one of her favorite events of the year. She describes it as special because it’s the only time of the year that members are virtually guaranteed to meet Bentley. She said that originally only 100 members were going to be able to meet Bentley this year, but he changed it to include all 250 members who registered to attend the event. Fan club members do get a chance at a meet and greet at concerts, but only 20 names are drawn for each concert meet and greet.

Read the rest of the article here.

Everyone send lots of thanks to Rick for helping us promote our prez., Dierks Bentley! stummagazine.com gets over a million page views a month--that's a lot of exposure for DB!
Posted by DB Congress at 9:24 PM