DIERKS RECORDS A TRIO OF THREADS

The Nashville flood at the beginning of May caused the WSM studio, where Dierks Bentley's "The Thread" radio show is broadcast from, to have to broadcast from a make shift studio. Before the storm, they were using 2 locations--the office/production studio (where they record the shows.) That building was under water. It is located near the front entrance of the Opry House. Their other location was the "live" studio inside the Opryland Hotel. Though it was not under water- a lot of the hotel was - so it was evacuated.

Ever since, repeats of The Thread have been running on Mondays at 2 p.m. central. But Shannon McCombs, Dierks' producer, told me he recorded three more shows yesterday. "One I titled Mowing the Bluegrass, it's a Ricky Skaggs show. The other two are #1 songs of the 60's, plus a show that features Loretta, Patsy, and Brenda Lee. Dierks recorded these three shows at the GAC studio, they were kind enough to offer after the flood. So many great people in this town."

Here's a post flood photo of the WSM studio that they normally used. The Mic to the far right, in front of the muddy computer monitor is where Dierks would sit and record The Thread. (Photo credit wsmonline.com) 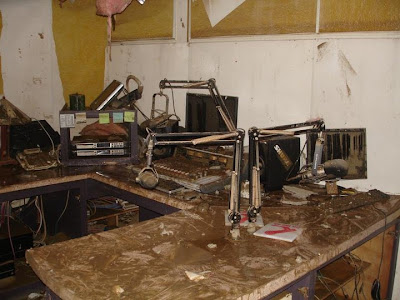 No word on when these three shows might air, but as soon as we know we will post! Stay tuned!
Posted by DB Congress at 7:43 PM