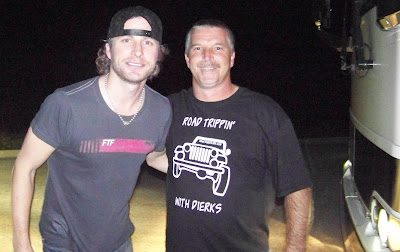 Well, after flying 3800 miles round trip, I'm back home and rested now. Two nights of Dierks in Las Vegas were just incredible! I got to meet some great friends out there and just hanging with them was a ball! The House of Blues is an awesome place for a concert. I stayed in the Luxor and was able to walk from hotel room to the venue. As we were waiting in line for the first show we saw Dierks heading in to the venue. He stopped and talked to us for a few minutes and thanked us for coming out for the shows! Also talked to Tim before he went in.
The set list on Thursday was really good. Dierks seemed to be stoked to be back in Vegas as it showed with his enthusiasm on the stage. So much so that when he went to run around behind Rod, he slipped and fell. But he rolled over and jumped up without missing a beat. The show wasn't over until almost 1 a.m. and we were exhausted by the time we left.
The next day we were in line at the door about noon. The price you pay to be in the front row and worth every minute of the wait. I called Nid by phone and had a great chat with him then handed the phone over to Janet for a chat too. Because of some overbooking by the HOB Dierks didn't hit the stage until about 11:30pm. We knew he had changed up the set list right from the first song. Instead of opening with Sideways (which they've done for months) they played Lot Of Leavin' first. It was a great mix of songs as the night went on.
At one point he told the crowd as he pointed down to the front row that he wanted to do a song for his fan club. That these fans "fly all over the country to come to his shows" and he wanted to thank them for doing that. He then started to play "Good Things Happen" which is rare for him to do live! As he got to the last verse, he sang this: "good things happen....when the Congress is around" and pointed right in our direction. That was the highlight of the weekend for me! Then they did a bluegrass set and finished the night with Folsom.
A great weekend that I will NOT soon forget!
~David
DB Congress Rep
Kentucky
Posted by DB Congress at 1:23 PM