The 44th Annual Academy of Country Music Awards is honoring George Strait as the "Artist of the Decade." The ACM Awards will be telecast live on Sunday, April 5, 2009 (8 pm Eastern), and Dierks will be presenting an award (which one is yet to be named).

The next day (April 6), a special concert will be filmed with a live audience from the Las Vegas MGM Grand Garden Arena in Las Vegas. The show will air on CBS on May 27. 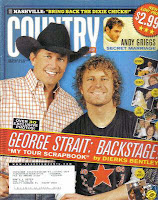 If you live close enough to drive, or you can hop on a plane last minute, tickets are still available to the public for the April 6 event for $200, $150 and $100 through Ticketmaster.com for the all star country concert television taping. Proceeds of all sales benefit the Academy of Country Music Charitable Fund (ACMCF).

Strait is the fifth to receive the artist of the decade honor, after Marty Robbins, Loretta Lynn, Alabama and Garth Brooks.
Posted by DB Congress at 6:27 PM