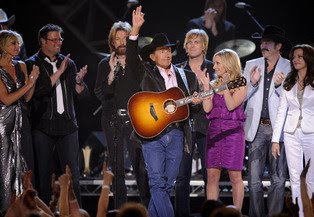 “It's kind of ironic to be standing up here getting ready to present this award to the man who’s fully responsible for where I’m at today,” Garth Brooks said. “It is an honor to pass the torch to the man who I believe has carried the torch for country music for the last 30 years,” he said.

After Garth Brooks’ unannounced appearance, it was Strait’s turn. As anyone who has watched tributes knows, they can take on an almost “I’m watching my own funeral” feel for the recipient, and as performer after performer talked about growing up on Strait or—to really dig in the dagger- Bentley talked about how his dad loved Strait, the 56-year-old honoree must have felt he was as old as the hills.

“As a songwriter, the ultimate goal is to get George Strait to cut one of your songs,” another performer, Dierks Bentley, said. “I’m not afraid to say I’ve stalked and ambushed him a number of times … I think the last time was in an elevator in Nashville,” he joked before slipping Strait’s wife, Norma, one of his CDs.