According to an April 6 Luxe-Life blog , "Dierks Bentley partied into the early hours at Tabu ultra lounge in the MGM Grand."

That must've been after the ACM Awards, held in Las Vegas Sunday, April 5.

Rewind 48 hours to the concert and Meet & Greet, where a few Utah fans were fortunate to meet Dierks on Friday night at the Peppermill Concert Hall, inside the Montego Bay Resort.

Like Lynette, a Salt Lake City, newly-joined DB Congress rep and fan club member. Of her very first DB Meet & Greet ever, she says, "The Meet and Greet with Dierks was amazing! He is so down to earth and sweet! He talked about going on tour with Brooks and Dunn and Brad Paisley. I wish he would have talked more about Keith Urban 'cause I'm a huge fan. It was an awesome show, and I feel so grateful to have met him!

I was so scared and anxious but I looked at his face and instantly calmed down. He is so cute--much smaller than I expected--but soooooooooooooooo cute!

He did a great job, Can't wait until he comes to Utah in September." 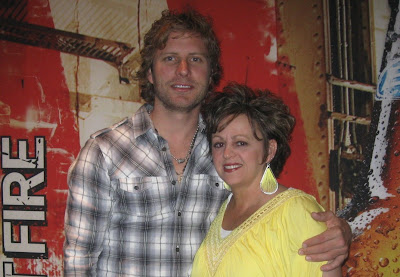 Then there's Karen, also from Utah, who came dressed for the part; 'and I can see you came to rock in your blue jeans and white tank top...' as Dierks sings in Sideways.

"I was lucky enough to get a meet and greet through the fan club. It was awesome. I have been to lots of meet and greets and Dierks was the first one to stand around and chat with his fan club members for a while. He also spent quite a bit of time talking with each one of us while we had our picture taken and got an autograph. He was actually nice enough to sign more than one thing if people asked him to. I already knew he was a nice guy because he seems to love animals and adopted Jake from the shelter.

He was so sweet to tell me I “looked beautiful” in my white tank top and blue jeans. It was the best M & G I have ever been to. Dierks rocks! 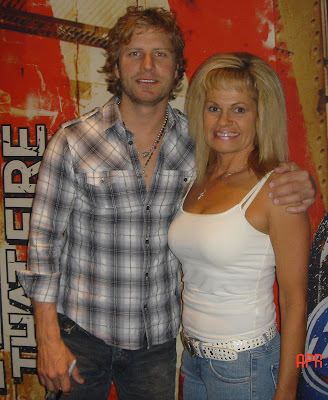 At the concert, I had 6th row seats and of course I stood up the whole time having a great time. He motioned me up to the stage and took my hand and twirled me around. Dierks certainly knows how to make an old gal’s night! Unfortunately, it was so unexpected that my husband didn’t get the moment on video." If anyone has this on video, please let us know!
Posted by DB Congress at 8:45 PM