DIERKS HAS NERVE, LEARNS A LESSON 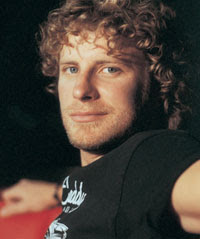 On March 21, I posted a blog about an American Songwriter magazine review of Feel That Fire. "Anonymous" commented that a little bird told them Dierks Bentley was going to be on the May-June Cover, and ended with the website address.

So I go check it out, and search on Dierks. No cover yet, but I did find an article from 2005 about his Modern Day Drifter album. I always look for interesting stories or quotes from D that I have never read before, and I thought this was a really cool story to share with you all. Enjoy!

“I remember the first time I had the nerve to play one of my songs for someone. I was working answering phones for a Nashville publishing company, and some of the songwriters invited me upstairs to have a drink. They were going to play some songs, and maybe I could play one I’d written too. So we all sat in a circle, and the guitar came around to me, and I played a song that had gotten a good response from my family and my friends. I thought it was pretty good. When I got done, one writer said ‘Man, I never really got the hook on that song.” Then another said, “It took you forever to get to the chorus.’ It was semi-devastating. In the end, one of the guys pulled me aside and told me to call him after I’d written 500 songs. I thought he was just being an a******, but he was just trying to help me. I learned that you’ve got to write them and throw them away. Don’t take them too personally and be ready to let go of them. Let them be beaten up, and just let them go where they need to go. That was a good lesson.”

Now I am really curious as to the name of the song he played for them! Did it get thrown away or did it get re-worked and become a cut on an album?