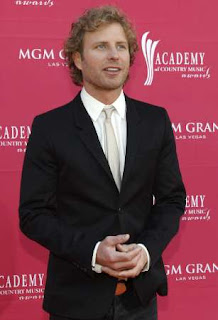 Although we all know he totally deserved to be nominated for an ACM award but wasn't, Dierks Bentley was picked to present the Top Female Vocalist Award (to Carrie Underwood--Miranda got robbed IMHO!) at last night's ACM Awards. I thought he was looking dapper, and I was lovin' the soft curls. Let's see what the buzz was on Mr. Bentley.

First, there was a rehearsal observation from Whitney Pastorek via Entertainmentweekly.com: "3:23 p.m. Reba is on stage in front of me. She looks great. When does she ever not? Even in jeans and a sweater, she is a classier broad than I am. If doing this show's gotten old for her, I can't tell, and her run-thru of "Strange" is right on point, three straight times. After she finishes the song, a female announcer's voice says, "Ladies and gentlemen, Dierks Bentley and Darius Rucker." A tall man in glasses and a short auburn-haired woman emerge. They are neither Dierks nor Darius, I'm pretty sure."

During the live show--no Darius.

Nora Ashkar posted on film.com her favorite fashion of country men on the ACM Awards: "As for country's men, Jake Owen looked sharp in a white pinstripe suit and a shaggy do, and Dierks Bentley did us a favor sporting fitted jeans and a jacket while letting his curly hair lay loose."

Well, as Dierks always says, 'you can't believe the good without the bad,' so here's Saul Relative's (that's his name?, really?) take on Mr. Bentley's attire: "Still, the worst dressed had to go to Dierks Bentley, who presented. He looked as if he was wearing his little brother's suit jacket. It was buttoned, which made it look even worse. Then there was that pale yellow-ish tie. You could write a country song about the way that poor boy was dressed and have a hit on your hands. It was tragic."

Now Saul, that was kind of harsh, don't ya think? I thought the ensemble was ten times better than last year's mustard suit.

And, to end the fashion foo foo on a positive note, here's a quote from our very own DB Congress Historian, Stephanie: "Seriously, how freaking adorable is he?! The curls are looking good, a little scruff...I approve! Dude, you've been missed at the awards shows."

I refuse to write about any of the award nominees or recipients since our "Dude" and president was unrecognized--with not so much as a nod. In the words of Jerry-the-OCD-lawyer from Boston Legal..."hhmmppff!"