In addition to his on-stage singing, Dierks Bentley has been known to connect to his fans in a very touchy way--by stage diving into the crowd! And one particular night in February 2007, he persuaded one Illinois Dierks fan-for-life to go stage-diving with him! Who could say no to those baby blue eyes and that killer dude smile? Here is Stacy's story:

"It was August 21, 2004 and my friend begged me to go to a local fair to see this up-and-coming country singer Dierks Bentley. Now I didn't want to go, but my friend said it would be a great time and that he was real cute and I would enjoy the show. So I thought, "What the heck?" and went.

Now in his earlier performing days he wasn't the great entertainer we know and love today. He basically stood in the middle of the stage playing his guitar and looking all cute in plaid--hardly any crowd interaction (which is hard to believe now).

After the show, he met all us fans and I'm not one to pass up on meeting country singers so I got in line. When it was my turn he was just so sweet and down to earth and something just clicked! He called me a "sweetie" and I knew I had found an artist to be a fan of for a lifetime.

Three years and 13 shows later, it's February 1, 2007, and I find myself at Joe's Bar in Chicago. This was the High Times and Hangovers 3 Tour with Cross Canadian Ragweed. This show sold out in four minutes so we knew we had to get there early to get our front row spot! We had to resort to joining Ragweed's fan club just so we could get tickets! We got in line at 10:30 am and there were only two people ahead of us! We were stoked!

My birthday was the week before so I made a sign that said "It's my b-day..dance??". I held it up a couple of times but got no reaction from him. No biggie to me. So he's singing 'Come A Little Closer' and he gets to the music break in it and before I knew it he was coming towards me and grabbing my hand and pulling me up on stage! I was flipping out inside! 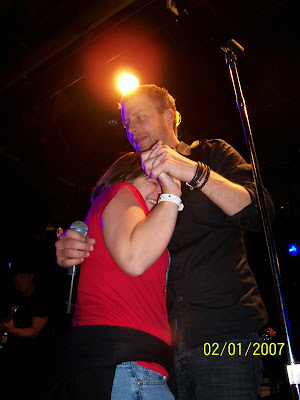 He tells everyone about my sign and then we slow dance a little. Then he starts pushing me towards the crowd.

"What are you doing?!"
Dierks just smiles and says, "Let's stage dive!"

I told him no and that the crowd wouldn't catch me and he assures me they will but I still say no.

If I do it, will you do it?"
Without even thinking I just blurted out "OK."

Then he does a running start into the crowd and lands right into a mass of waiting hands to catch him. He gets back on the stage then comes back to me.

"Your turn!"
I then had changed my mind and told him 'No' again.

So we walk over to the crowd and he pushes me back into the crowd and they do catch me! It was the weirdest feeling with all these hands on your back, but it was by far the 'kewlest' thing I have ever done!

I get back onstage with D and he gives me a kiss on the cheek and says "Nice job!" 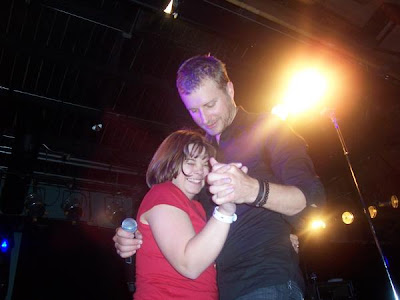 A year later I was at a meet and greet with him in Moline, IL. When it came to my turn to meet him he goes "We stage-dived together didn't we?" And I told him yeah and he goes "'Stage Dive' Stacy!" And the name has stuck ever since!

Just last night at my 23rd show in Iowa City, IA he sees me as he's passing us to get on his bus and he goes "Hi 'Stage Dive'!" I get butterflies in my stomach just thinking that my favorite singer knows me by name. He makes me feel so special and that's why I will be a fan for life!"

Stacy says she has the video from this night to remember, but is holding it close to her heart!
Posted by DB Congress at 8:01 PM