I love listening to Rod Janzen, live in concert as Dierks' lead guitarist. Man, he can make that electric guitar sing! I love all the guys in the TLB (Terminally Loneseome Band)! Robbie Harrington can handle that bass without even blinking--and who knew he could actually sing! And who doesn't love the banjo/steel guitar playing Tim Sergent and bang-on-the-drum-all-day, Steve Misamore? These guys gel so well together, and the result is an amazing sound--live and in person! 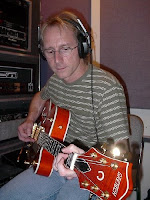 talented studio musicians? J.T. Corenflos can boast lead guitar liner note credit on every Dierks Bentley studio album song except the bluegrass cuts and Better Believer on Feel That Fire. The Terre Haute, Indiana native has been recognized six times for his guitar prowess by the Academy of Country Music and this year ws no exception.

So, with all those ACM nominations, do you think J.T. was named the 2009 Academy of Country Music Top Guitarist of the Year? Find out here.
Posted by DB Congress at 6:45 PM