Dierks Bentley and his new bass guitarist, Cassady Feasby, have a lot in common. They both like to laugh, have a passion for Pearl Jam and love going home to their girls--wives and daughters. This is the second exclusive interview in the series with new Team Lonesome members. The first was Brian Layson. Please join me in welcoming and getting to know Cassady Feasby.

Cassady: In January of 2010 my wife, Sara, began nannying for Evie [Dierks' daughter], which led to her and Cassidy [Dierks' wife] becoming friends. Cassidy sent a text message to her when we were driving to an ultrasound appointment one day asking if I knew any bass players who might be interested in auditioning to play with Dierks. Obviously I was. I spent the next weekend woodshedding four Dierks songs for a Monday afternoon audition. The audition went very well. As far as being a fan, I've always enjoyed music with lyrics and melodies that take me to interesting places or remind me of events in my past. Dierks' music does that. Whether on stage or waking up on the bus, it's still sinking in that I get to play these songs for a living. On top of that, (and I'm not brown nosing here) what you see is what you get with Dierks. He is a great guy, dad, and bossman. Every aspect of his organization is 110%. 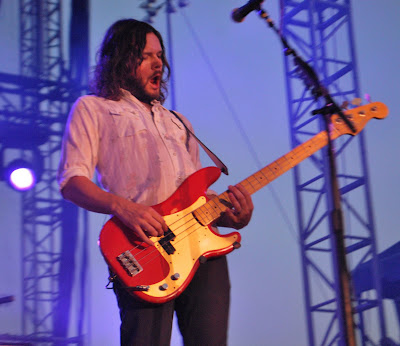 Cassady: I grew up in Convoy, Ohio. I have one brother. My parents showed cutting horses when we were growing up. We traveled a lot in a truck and trailer entering horse shows - not unlike what I do now. We always had a barrage of random animals on the farm with us. I have to say my favorites were the goats. Insert joke of choice here. :o) I have played drums since I could walk. I started playing guitar in '92 and bass in '95. In 1999 I moved to Nashville to attend Belmont University and graduated with a B.A. in music in '03. During that time I started beating the streets playing drum and bass gigs whenever, however, and with whoever I could. I've been a sideman as well as a frontman in original and cover bands. Prior to joining Team Lonesome, I was Warner Brother's artist Jason Jones' tour manager and slapper of da bass.

DBC: You previously toured with Jason Jones, Sarah Buxton and many others. What's one thing you learned performing with them that you bring to Dierks' show?

Cassady: Aside from making the music feel and sound good, I try to avoid any onstage collisions. Oh, and I've contributed the longest beard to the band...so far. 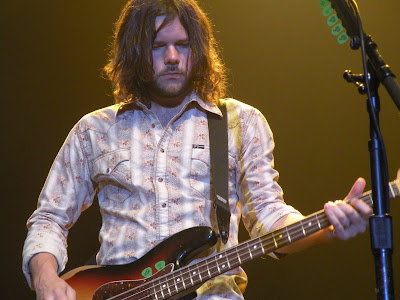 DBC: You sang a killer Chris Stapleton stand in vocal on David Letterman recently when Dierks and you guys sang "Fallin' For You." Have you ever sung the lead on stage or on a record?

Cassady: I joined my first band when I was 13. I played drums and sang probably 90% of the songs we played. I sang on several demos (lead and bgv [background vocals]) while in college as well. I've had side projects prior to Dierks that I've sung lead in. As Waylon put it, "Singin my songs, one of his now and then..." 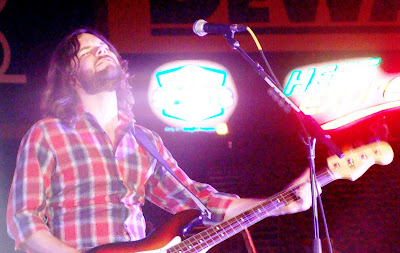 DBC: What is your favorite song to sing and perform on stage with Dierks and the band?

Cassady: My favorite song from the Ridge album is "Fallin' for You". The few times we've actually done it have been incredible. As far as a song from the full band show "Long Trip Alone" or "Trying to Stop Your Leaving" are at the top of my list. 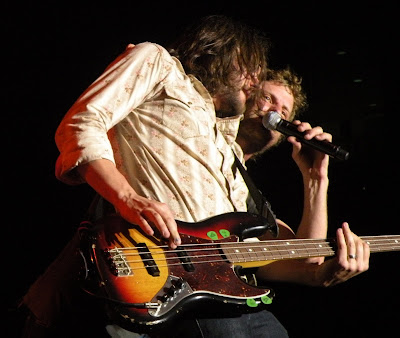 Cassady: That's easy. "That Don't Make It Easy Loving Me." 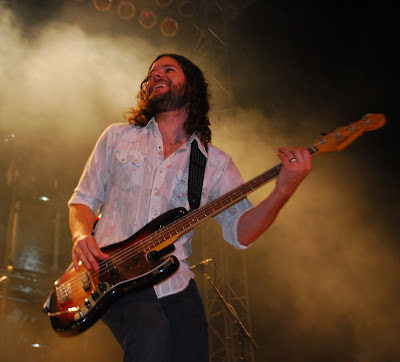 DBC: Your Facebook interests include love, family, tasteless jokes, and drinks. "I believe they all go hand in hand." What's been the funniest moment in the six months since you've been with Dierks and the band? I'm talking laugh so hard you can't breathe moment! Please try to keep it PG13! DB Congress reps are age 7 to 77!

Cassady: Wow. I've laughed myself into splitting headaches many times. Humor-wise, pretty much anything goes as long as it's not hateful. Specifically, though, I've seen band guys (who will remain unnamed) on the bus dancing around in choice attire. I would say I wish you could've been there, but it may have scarred you for life. We are honky tonkers hanging out on a bus for hours on end. There have been many "can't breathe" moments. ;)

DBC: Speaking of 7. Dierks' lucky number is 7. What's yours and why?

Cassady: I've never really had a lucky number, however, many important events in my life have happened on the 9th, 19th, or 29th, so I'll go with 9.


DBC: What one non-musical thing do you have to do when you're not on the road with Dierks? What's your passion?

Cassady: My wife and I cook a lot. I love holding and singing to my daughter. The yard will always need mowed. Sometimes I'll play upright bass solos for my wife wearing only cowboy boots and various forms of undergarments. 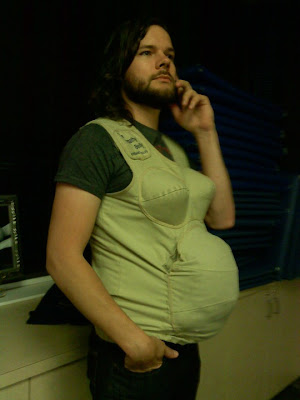 Cassady: We have a 3 month old daughter, Amelie, as well as a bird-dog named Garnet. When I'm not on the road, I'm at home with my ladies. 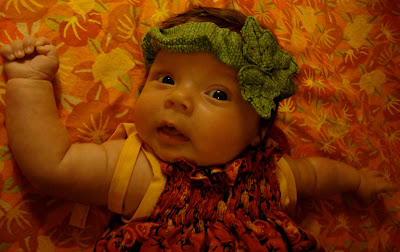 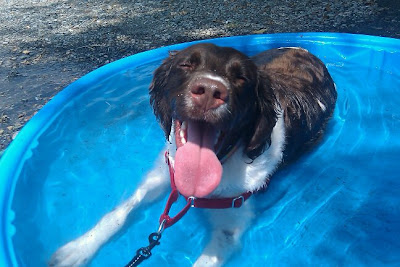 DBC: You have a gazillion artists on your iTunes list, who double as your influences. Can you narrow that down to the three who have made the biggest impact and tell us how they have made a difference in your life and your career?

DOC: No, I can almost guarantee that I will not actually answer this question correctly.

->George Strait - The first three discs from his boxed set are incredible. My mom had every George LP when I was growing up. My very first concert was in 1987 with Kathy Mattea opening for him. He is one of the not-so-missing links to real country music.

->Creedance Clearwater Revival - My first memory of actually listening to music on my own is CCR's Chronicle album. The first guitar solo I ever learned was "Suzie Q".

->Marshall Tucker Band - My name actually comes from the credits on the "Fire On the Mountain" album. Aside from being jam-bandish, MTB was organic and hauntingly soulful.

And...when I was 11 my cousin introduced me to GnR's "Appetite for Destruction", STP's "Core", and Pearl Jam's "Even Flow" albums. Prior to this point in time, I pretty much had (what would later be determined) a man crush on Garth Brooks. I will always be searching for good music new and old.

Right now my favorite albums are The Bird and The Bee's first, self titled album and their newest album, "Interpreting the Masters" (all Hall & Oates covers). Also, no matter what mood I'm in, Slipknot's first album brings me back to normal for some reason. 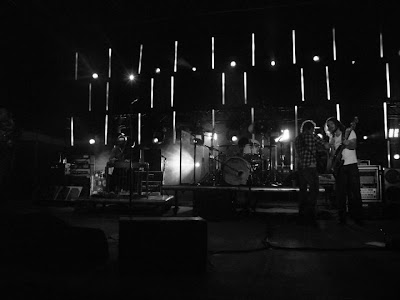 
DBC: Your nickname is "The Doctor." Did Dierks name you that or did you have it before? How did that come about?

Cassady: Dierks did not name me that. I earned that nickname seven or eight years ago. This is a pg-13 blog, correct? Yes, there will be no story for that one.

DBC: Since joining the band, you've played The Opry, Letterman, Fallon, Kimmel...which one resonated the most with you and why?

Cassady: All of the late night tv shows have been firsts for me. The Opry was especially great not only because of the incredible lineup, but it was at the Ryman. My favorite would have to be the Jimmy Kimmel extravaganza. The stars aligned that night for Dierks AND Jimmy. What better opportunity for everyone involved to do what they do...with no electricity. 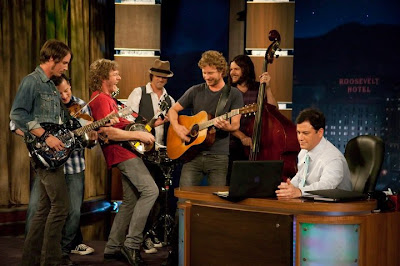 DBC: Any surprises from the DB fans? I hope they've made you feel welcome. Do you tend to stay on the bus or come out and visit before/after shows?

Cassady: I usually get off the bus and mill around the venue. I enjoy seeing the local sites...especially the local fishing. If anyone knows where the bass hang out, message me at www.myspace.com/dr.feasby. There haven't been any surprises. I've only met a few fans here and there and they've all been super cool and welcoming. 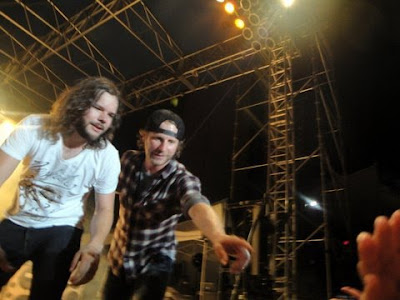 DBC: Tell us one revealing thing about Dierks that we don't already know! And, no, you can't use the same answer as Brian or Dan!

Cassady: Hmm. How do I not cross the line on this one? He enjoys watching the Pro Bowling Channel and his favorite past-time is cropdusting.

Thanks, Cassady for the 'candid' answers! Welcome to the DB Congress!

P.S. Keep checking back for the exclusive DB Congress interview with the newest addition to the team - Fiddlin' Dan Hochhalter!
Posted by DB Congress at 8:04 AM