Dierks Bentley and Producer Shannon McCombs put together "The Thread" radio show that aired Monday, August 2 on WSM 650 am to honor legendary singer/songwriter Wynn Stewart. Wynn, a big influence on Dierks, charted over 30 hits beginning in 1956, until his death in 1985.

Songs on the one hour show (2-3 pm central every Monday) included Keeper of the Keys, It's A Beautiful Day from 1970, Waltz of the Angels, Love's Gonna Happen To Me, Big, Big Love sang by K.D. Lang, Wishful Thinkin', and many others.

"If you like Buck Owens...Merle Haggard...Dwight Yoakum," Dierks tells us, "he [Wynn] is the reason why those guys are around. He was the pioneer of the Bakersfield sound. What a great artist he was. He was a also great songwriter, who co-wrote, "You Took Him Off My Hands" for Patsy Cline, with Harlin Howard." 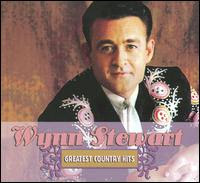 Stewart's only #1 song was from 1967--"It's Such a Pretty World Today." "That's not a fair way of judging Wynn's career--he had hits from 1956 to 1985," declares Dierks. "It's one of my favorite songs of his and was sort of the entry way for me into Wynn's music. It made me start digging a little deeper into his catalog and discovering some more music." George and Jake, Bentley's dogs, could be heard in the background "jingling." According to Dierks, "that's their way of applauding."

About halfway through the podcast, you'll hear Dierks' very own, "Up On The Ridge."

While Merle Haggard was playing bass for Wynn Stewart's band in 1962-63 in Las Vegas, he heard Wynn singing "Sing A Sad Song" and asked if he could record it. Wynn agreed and it became one of Merle's biggest hits.

Dierks said he loved hearing how good the stuff sounded that "we based our entire country music business upon. You can hear Wynn's influence all over country music." Artists like Merle Haggard and Dwight Yoakam, who sang the Wynn Stewart-penned, "Playboy."

Dierks admits, "I've never recorded any Wynn Stewart songs but I sure played enough of them down on Lower Broadway."

This show was supposed to air July 26 and I asked Shannon what happened. "They flipped the shows because they had a hard time finding some of the recordings I added to the show," she told me. "Some of those old songs can't be found on itunes!"

Listen to the whole show here.

I've got a free Up On The Ridge CD for one lucky winner who can tell me the last song that aired on 'The Thread's' broadcast of August 2! Emails only: Ronna@dbcongress.com. You must also leave a comment about this blog--but don't post the answer! I will draw a name on Tuesday out of all the entries!