Did Dierks Answer Your Question? 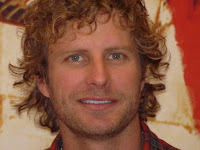 CMT, aka @FollowCMT on Twitter, asked followers to 'tweet' questions to ask Dierks Bentley. They posted his answers on his Artist of the Month page on CMT.com! Did Dierks answer one of your questions? Check it out below!


@areyes03: Any new songs you're writing? I've been trying not to ... trying to just focus on and enjoy Up on the Ridge. But, I've had some ideas floating around up there for a while and I'm starting to think about getting back into it.

@countrytunes: Would you please consider adding "Prodigal Son's Prayer" to your set list? I certainly will. After debating it for a few years, we've decided to add a fiddle player to the band. Having him will really help out with playing songs off Up on the Ridge live, as well as grassy tunes like "Prodigal Son's Prayer" from previous albums.

@rich94car: When did you realize you wanted to sing? I've always loved music ... had posters of singers all over my walls growing up. (Billy Idol, Madonna ... a lot of stuff my sister and older friends turned me on to.) But at 17 I heard Hank Williams Jr. for the first time and I knew without a single doubt that I wanted to be a country singer.

@RebaHardin: If you could duet with any other country artist who would it be? Guy? Girl? Singing a duet with George Strait would be about as good as it gets. I just did something with Rodney Crowell that will be coming out sometime soon, and that was a real highlight for me. Singing "Bad Angel" with Miranda Lambert and Jamey Johnson is the coolest collaboration I've ever done on one of my records.

@tswiftfan11: Were you worried when you released Up on the Ridge that no one would take to it because of the different sound? I think when people hear the album, in particular the single, they get that it's not just a "bluegrass" record. My hope is that first song erases any pre-conceived ideas that anyone might have had about the record or bluegrass music in general. Then, if they want they can dig a little deeper into some more traditional stuff like "You're Dead to Me" or "Rovin' Gambler."

@flybaby014563: Why was it so important to have Miranda and Jamey in the song "Bad Angel"? "Bad Angel" was written by Suzi Ragsdale and Verlon Thompson. They did a live version of it with Guy Clark and Darrell Scott. When I thought about who would be my current day Guy Clark and Darrell Scott, I immediately thought of Miranda and Jamey ... two singer-songwriters I truly respect and enjoy hanging out with.

@KarenDeaney: How did it feel to play "Wanted" with Bon Jovi at HullabaLOU? Incredible/amazing/surreal. My first concert I snuck out to was Bon Jovi with Skid Row as the opener. I was 13 years old and had just discovered the electric guitar, power chords and distortion pedals. I told Jon that the only thing I remembered about that concert was the girl standing next to me in a short leather dress ... he loved it!!!

@laurastinsonn: What's your favorite song to play at one of your concerts? I've written or co-written most of them, so they all have some particular thing that makes enjoy digging into them and singing them night after night. But, I will say "Settle for a Slowdown" and "Long Trip Alone" are two I really enjoy singing. I also love playing the stuff off of Up on the Ridge because I get to jam with my band and nothing is more fun than that.
Posted by DB Congress at 9:28 PM