Our guest blogger today is DBC Iowa Rep and Cabinet Member (Director of Promotions), MonaP! This is her review of Dierks Bentley's show last night at Harrah's Casino in Council Bluffs, IA.

I was really slow getting out of the house even though I had a 3 hour drive. I wasn't really planning on meeting up with anyone, as you [may] know I haven't been online much. I figured I would wind up back a ways from the stage, and then would lose that spot while attending the M&G. My own fault. To be honest I almost didn't go at all. Anyway, I arrived around 2:30pm to find a very short line. And familiar faces! I run into a few other fan club members regularly in the IA area--Doug, Lori, Holly and Kristen. Our own DBC Stephanie was there, too!

It was a hot and humid 89 degrees. We sat under the tent set up for the merch tables until they starte setting up the tables and then it was in the sun! I stopped by the merch tables to look for new shirts and saw two I didn't have. Josh asked about my shirt. I was wearing the UOTR shirt with the album cover photo on it. I had ordered it online in June. He didn't have this style.

Gates opened at 6 pm and we all got in the front row. I had never been to this venue but I kind of like it. It is a small venue but open and well laid out. Holly and I stood pressed to the gate until it was time to go back for the M&G at 7:30.

We went back and Dierks was so awesome. How can he remember so much!? While waiting in line I realized I hadn't remembered a card for Dierks like I usually always do. Couldn't believe I forgot. Anyway, I reminded him of my name and then he knew who I was. My last M&G was 363 days prior yet he mentioned I had got my haircut. It is about 3-4 inches shorter now. Wow! 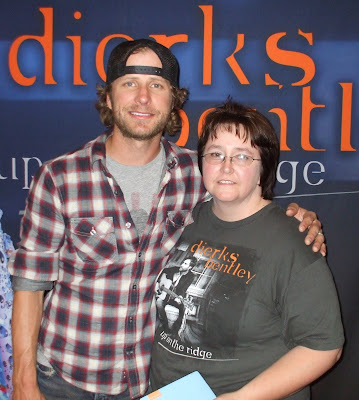 Got my picture and he signed my little photo album I always take everywhere with me. He asked if liked the new album. OF COURSE, I LOVE IT! I went over and stood with others and he greeted the next person in line. Right after saying hi to that person, he turned around and looked at me and asked "Where's the shirt?" All I could say was "I just didn't wear it tonight." I honestly felt like I let him down! To make it worse, after the group photo and the brief Q&A, he hugged me goodbye, thanking me for my work supporting the fan club! I honestly felt 2 inches tall!

I wasn't too impressed with the sound check for the opening act. The Dirt Drifters are a small group, first album you know...just getting started. They were so much better than their sound check. I enjoyed several of their songs. Planned on getting their CD but they were sold out by the time Holly and I went to the merch table. They were up there signing autographs and such.

We got their website info while asking about the CD. Holly brought them up on her phone and we watched a funny YouTube video. So we went back over and she told them we enjoyed the video. Their manager asked "You got your camera? Go behind the table and I'll take your picture!" He was really nice just as they all were. I really liked the song Married Men and Motel Rooms.

Dierks came out around 9 pm and played until about 10:30. He played all of the singles, LOLLTD, EMAM, SFASD, F&E, WWIT, TTSYL, CALC, IWMYCYE, Sideways, FTF, and my personal favorite--Long Trip Alone. During the short bluegrass section he did My Last Name and Draw Me A Map. DMAM and UOTR were the only songs from the new album. The only cover song he did was George Strait's, All My Exes. At the end of that, he segued into HAID. Did it beautifully! DMAM and So So Long were the only non singles he did.

Typical Dierks energy. The stage is quite small for a man who loves to run all over. But he made full use of it. As usual, he connected with the audience like I have never seen any other do. Not that I have seen a lot of shows, but...it was an awesome show.

He did one thing at the very end before he left the stage that made me curious. He walked back over to his own set list which had been taped down on all four sides instead of top and bottom, peeled it up and took it with him. To prevent fights? Hmmm...

Here are a few photos. The one of Dierks making the face while playing his accoustic, Brian Layson was showing his skills and then Dierks walked up and comically tried to do it. There was a funny bell sound while he was picking. I just love his sense of humor. 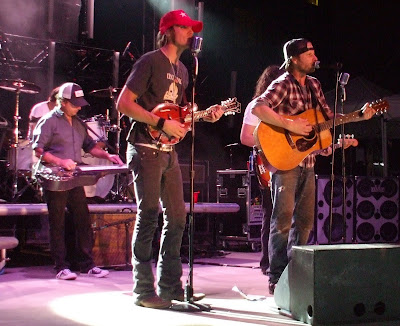 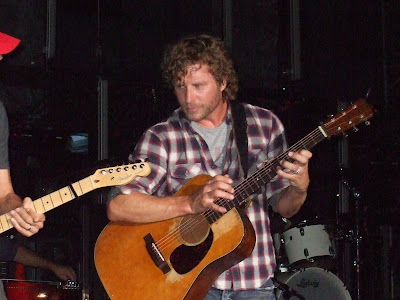 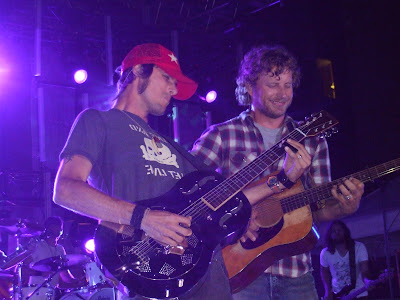 Thanks for sharing your experience, Mona, and Happy 3-year DBC anniversary TODAY! I think you should feel 10-feet tall that Dierks remembered you are the originator of the DB Congress T-Shirt! 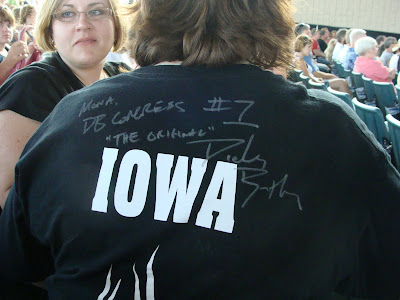 Email ThisBlogThis!Share to TwitterShare to FacebookShare to Pinterest
Labels: Council Bluffs Iowa, Dierks Bentley, Draw Me A Map, Harrah's Casino, Meet and Greet, Mona, Up On The Ridge