George and Jake join Dierks again this week in the studio of "The Thread," his WSM radio show. As he runs down the road songs. "Jake and George have been with me out there on the road, they know what the road is like and they have a good time being out there and this week the songs are all about the road--"Highways and Byways." Dierks' canine friends are country music fans, too!

Dierks kicked off the show with the "King" of the road song--Roger Miller--"King Of The Road." More songs on the play list include:

Give Me The Highway (Vince Gil and Del McCoury)

Route 66 (Asleep At The Wheel)
Dierks mentioned how this song means a lot to him since he's from Arizona and Route 66 runs right through it, and that he'd been on that famous road many times on the 25-hour ride to and from Phoenix, AZ and Nashville, TN in his Truck with over 200,000 miles on the odometer.

Highway 40 Blues (Ricky Skaggs) "One of my favorite bluegrassy country songs about the road--we used to play this song down at a little bar called Market Street on 2nd Avenue..."

Callin' Baton Rouge (New Grass Revival) Later recorded by Garth Brooks. Garth brought in Same Bush and others to play on this track because he couldn't get it the way he wanted it to sound.

Drivin' My Life Away (Eddie Rabbit)

On The Road Again (Willie Nelson) "The road song of my generation. Willie recently cut off his hair - I've have had some experience with cutting off my hair and getting a similar reaction - pretty unfavorable." 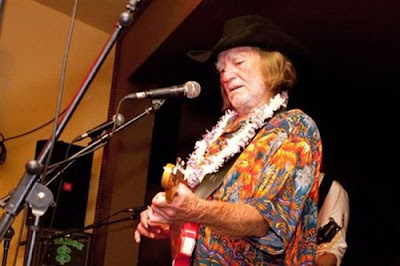 The Outlaw Story Song: Highway 17 (Rodney Crowell) "This song gives me goose bumps...it is so mesmerizing - really showcases Rodney as a story teller."

Red Dirt Road (Brooks and Dunn) "Me and my band have been known to do a bluegrass version of that song!"


"Looking at this sheet of songs Shannon [McCombs, Producer] has prepared for me, and I'm up next!"

Free and Easy Down The Road I Go (Dierks Bentley!)

Next Monday on The Thread, Dierks will go through the lying songs of country. Don't miss "Can’t Tell The Truth" on Monday, August 16 at 2 pm Central time! You can listen online at wsmonline.com.
Posted by DB Congress at 5:59 PM

Email ThisBlogThis!Share to TwitterShare to FacebookShare to Pinterest
Labels: Dierks Bentley, Free And Easy Down The Road I Go, King of the Road, On The Road Again, Red Dirt Road, Roger Miller, Route 66, The Thread radio show, WSM 650 AM Radio, wsmonline.com