Dierks Talks to The Boot.com 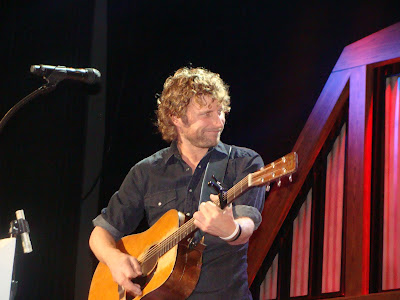 Dierks Bentley called theboot.com recently to share his thoughts on a number of things including a memorable Opry performance, how the Travelin' McCourys fit into his live show, a special Pearl Jam cover, whose music he's listening to lately and the announcement of the Nashville Miles and Music event (October 17)!


The Boot: You were on the Opry recently and you did a Bill Monroe tune. Do you have any memories of playing the Opry that stand out for you?

Dierks: The first time I played the Opry, Sonny Osborne was right there, listening, and when I came off the stage he looked at me and said, "Could you hear anything at all?" We had it cranked up real loud, and we were loud. It wasn't mean to be a compliment, but it was very helpful to me after I understood later on what he was saying. He was telling me that commercial country songs don't always go on the Opry; you've got to make your songs fit in that environment. He's the best harmony singer of all time. I've tried to learn his parts over and over; of all the singers I've listened to, it's his harmonies that I've tried the most to understand. He's the best to listen to.

The Boot: How have you made the material you played on tour with the Travelin' McCourys fit into your country shows?

Dierks: We expanded on the original vision, doing country and bringing out some of the original bluegrass instruments. There's more to country music than running around on stage and doing loud songs! This is what got me interested in bluegrass and country, were these acoustic instruments, and the power you can get from that type of song and this type of band. After the Travelin' McCourys allowed us to do more in the middle section with songs from 'Up on the Ridge,' and the audience reacted well to that, I added an acoustic set in the middle of my current show. I've heard some people say they like that part of the show the best. I can remember when I would go to shows and I'd walk away and had a good time being entertained, some of my most favorites were when someone did an acoustic set.

The Boot: Any particular artist you remember along those lines?

Dierks: The last time was Pearl Jam. They were playing an amphitheater, and Eddie Vedder came back with a guitar and a string section. That was really cool. I think he had a cello and a couple fiddles, and then him on guitar. It might have been 'Just Breathe.' ... I've been doing that song in my bluegrass show with the Travelin' McCourys. I tell the audience this is one that goes way back with this old bluegrass band [laughs].

The Boot: You've spoken to us in the past about artists who were bridges between genres of music. Do you see yourself as that kind of artist?

Dierks: I think seeing Bill Monroe in Ricky Skaggs' 'Country Boy' video ... if you love Bill Monroe that is coolest thing ever. I think Skaggs has always made a lot of great records that were bluegrass or had elements of bluegrass, and he turned a lot of people on to bluegrass. He is one of those people that was a bridge, bringing people from one area to another in music. Some of the other folks I think of when I talk about bridging musical genres are folks like Marty Stuart, Flatt and Scruggs, the Osborne Brothers. I think Garth Brooks was like that for a lot of people. I definitely have done that in the past a little bit. Some of my fans would make the comment, "I didn't like country until I heard your music." Now I've heard, "I didn't think I'd like that bluegrass music but I heard your record and it's turned me on to some of the more acoustic sounds." But I'd not put myself in that same category with the folks I mentioned. After a while, we will have the chance to tell more about how many folks I really turned on to bluegrass and country through my music.

The Boot: Whose music are you listening to now?

Dierks: Oh gosh, it's so all over the place. Sam Bush has a new record and I've been listening to him. Ryan Bingham, I think his music is great when it comes to country stuff; it's a toughness that doesn't sound manufactured. I've gone back and been listening to some old Billy Idol music; some of his songs might translate to bluegrass. He was the first musical person I really got into, the first posters I ever had on my wall. I've always listened to Flatt & Scruggs, the Osborne Bros, Larry Cordle, the Grascals, Del McCoury ... in the year leading to this record, I was listening to a lot of the old bluegrass.

The Boot: How many more Miles & Music charity events do you have coming up this year? How has it worked to have it in different cities outside of Nashville?

Dierks: It's a lot of work for my team that put them together. It's very difficult to organize. You have to involve a local dealership and get the acts to play. You also have to get the motorcyclists involved and the state police involved. But it's also a lot of fun, and we've raised a lot of money for hospitals around the country. I'm looking forward to Nashville on October 17. We have one in Seattle on September 18 in conjunction with the Puyallup Fair. We're gonna do a motorcycle ride on the afternoon when I'm playing the fair that night. It will support the Seattle Children's Hospital. And we are planning one for Chicago in 2011.

The Boot: Have you ever considered taking on any acting roles now that you have established a career in music?

Dierks: I did read the script for 'Crazy Heart.' It wasn't the part that Jeff Bridges played but another one of the roles. I'm just enjoying playing my music; I enjoy writing and recording and most of all, being out there on the road playing for my fans.

The Boot: Have you and your family settled into the new house?

Dierks: It's a process. I've never been one to get everything perfect. We've been there a little over a year and we've still got a lot of pictures to hang up. We try to enjoy the house, and it's home for sure. Both dogs think they own all the rooms -- every room is Jake's room! We like being this close to town. I like the country, but living closer into town came down to the reality of what is quality of life and that's being here with the girls when I'm home. It's so close to what I do -- which is go to the studio, play hockey, meet the bus when we go on the road. I felt like I needed to be near the city to be close to all that. Being that close does allow me to spend more time with the girls. Our house sits on less than an acre, right in the middle of town ... My daughter does most of the interior designing! She has a blackboard in her room to draw on. We love it.
Posted by DB Congress at 9:57 PM