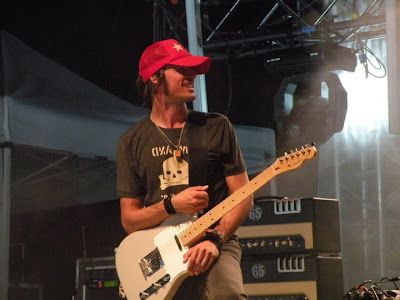 If you've attended a Dierks Bentley show in the past six months, you may have noticed a few new faces on stage. I asked for an interview with each of them. New electric guitar player Brian Layson graciously and quickly replied to my "inquiring minds want to know" list of questions.

Introducing...Brian layson. Please join me in welcoming him to the DB Congress family!

Brian: Thanks Ronna! I appreciate your kindness and your welcoming me in! I'm very happy to be a part of the organization. My joining the band came about in a very casual way really...I met Robbie [Harrington] at a session a couple of years back and met Dierks at a few different shows where I was with other artists on the same bill. Then, Dierks did a couple of TV appearances last year for "IWMYCYE" and wanted someone to come in to play acoustic and help with some of the background vocals and they called me for it. During that trip we all hit it off and ended up all becoming pretty good friends. Fast forward to around March of this year, when the guys decided to make some changes, they called me up and just basically said, "You wanna come down and see what happens?" and it just fell into place literally in one day. And yes, I was (and still am) a big fan of Dierks' work. I have always really appreciated his music (even owned a couple of records) and respected him as an artist and a person, so getting the opportunity to work with him is definitely a milestone for me. 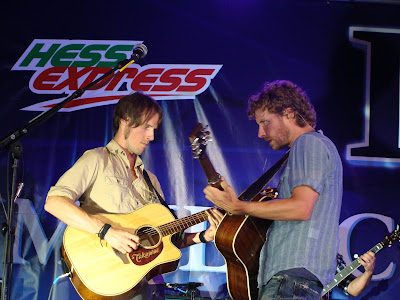 (Brian and Dierks after the Tampa Bay Rays game)

Brian: I grew up in Macon, Georgia and moved to Nashville to play with an artist named Will Hoge in 2000.

DBC: You were previously the Lead Guitarist/Musical Director for Julianne Hough. What is the biggest difference between Julianne and Dierks’ on-stage and off?

Brian: Well, even though they're very different from a musical perspective, as far as the "show" goes, there's actually a lot of similarities. Both Julianne and Dierks are high-energy performers that don't like to stay in one spot too long during shows:) Off stage, they're both great, down to earth people that are very passionate about what they do.

DBC: Who else have you played with? Country? Rock? Blues bands?

Brian: Will Hoge, Julianne Hough, Chuck Wicks, Lee Ann Womack, Holly Williams, The Revenge are a few...I was with Will for almost 7 years and didn't really start working in the country genre until just a few years ago even though I've been a fan of country for a long time.

DBC: You play electric guitar in the band, but you also play a bit of steel (watch out, Timmie!). What other instruments do you play?

Brian: Haha:) I don't think my steel "playing" will be putting Tim's job in jeopardy anytime soon:) I also play mandolin, bass, drums, and a little bit of piano. 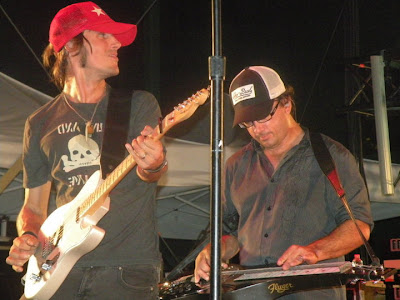 DBC: You’ve shown on stage your great harmony vocals. Describe the moment you realized you had a singing voice.

Brian: Wow, thanks! You know, I don't think I had a "moment." I started my own band when I was 16 and couldn't find a singer so I just started singing out of necessity I guess:)

DBC: You have a beautiful family! What’s your favorite thing to do with them when you’re not on the road?

Brian: Thanks! I'm a lucky guy for sure. I just try to spend as much time with them as possible, going out to dinner, watching TV, grilling out, etc...Nothing too out of the ordinary you know? Just hanging together as much as we can.

DBC: Dierks has made a huge impact on kids through his Miles and Music For Kids events. Tell us more about your charitable work with the inner-city children of Nashville.

Brian: Yeah, I'm really proud to be working with an artist that wants to help kids in need. My wife and I joined up with a ministry in Nashville called GloryStorm that was started by a couple in our church. We reach out to families in the housing communities/projects in Nashville and offer financial support, food and clothing, etc., to the families that are really struggling. Part of that focus is working with the children and doing whatever we can to give them opportunities and skills to better their lives and communities. We've started a learning/tutoring center for the children, an AWESOME youth choir called Unity, and a drama team, etc.

DBC: What is your favorite song to sing and perform on stage with Dierks and the band? Why?

Brian: That's tough! There's a lot...I really enjoy "Lot of Leaving", "Come A Little Closer", "Feel That Fire" to name a few. Honestly, they're all fun to play b/c Dierks has great songs and they're all loaded with fun guitar parts:)

Brian: Hmmm...There's quite a few there too..."That Don't Make It Easy Loving Me", "Here She Comes", "Prodigal Son's Prayer", "Gonna Get There Someday" are a few.

DBC: You’ve done some producing and songwriting. Tell us more about that. Have you and Dierks collaborated on any new songs?

Brian: Yeah, producing is something I really enjoy. I worked in studios for a long time before I went on the road full time and I love it. I hope I get the chance to do more of it. The work I've done so far have all been independent records...The artists include Chris Talley, James Dunn, Nick Malloy, and Deepwell. I'm getting ready to start on another project with a guy named Shane Bridges too. PLEASE check these artists out and lemme know what you think. They're great and I'd love to stir up some support for these guys. No, at this point Dierks and I haven't collaborated on anything new but I'd certainly love to.

DBC: You’ve been on board about six months now. How have you and your new band mates bonded?

Brian: Just a lot of laughing and hanging out. Golfing, XBox, staying up all night listening to great music on the bus, etc. We've all been doing this for a long time and it's good to be with a group of folks where everyone is really humble and grounded and easy to be around. No egos or drama floating around. That goes for our crew as well. It's a great group through and through. 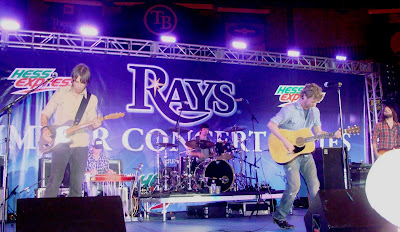 DBC: What is Dierks’ nickname for you and why does he call you that?

Brian: You know, I don't think I've gotten an official nickname yet! We'll have to work on that:) 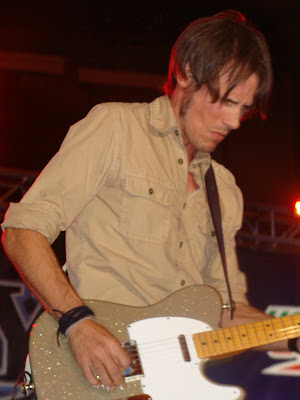 DBC: Since joining the band, you’ve played The Opry, Letterman, Fallon, Kimmel...which one resonated the most with you and why?

Brian: Letterman and the Opry show we did were really special. Letterman b/c it was a first for me. The Opry show was special b/c we had so many incredible guests joining us and it was just a great night. And with Dierks being a member of the Opry, it was that much cooler for me. I've done the Opry a few times before but performing with an actual "member" is a highlight.

DBC: What surprises you most about the fans? I hope they’ve made you feel welcome.

Brian: They have been really welcoming. I haven't gotten to talk to too many, but the ones I have spoken to have been great. I was a bit nervous about that actually because I know how lineup changes can really throw some people off, but hopefully that won't happen too much because we're having a great time and we're really committed to making our shows and performances the best and most fun they can be for Dierks' fans. After all, I'm not just a band member, I'm a fan of Dierks too!

DBC: Tell us one revealing thing about Dierks that we don’t already know! Remember, we’re hard core so dig deep!

Brian: Hmmm...Not sure what I'm at liberty to say...haha...One thing that's interesting is that the guy doesn't require much sleep. He's one of the only people I know that can hang out til 2 or 3 in the morning and be up and at 'em by 7am or so! It's pretty impressive. And he's really freakin' good at NHL Hockey on XBox, even though I beat him for the first time this morning! Hahaha! He'll hate that I put that:) 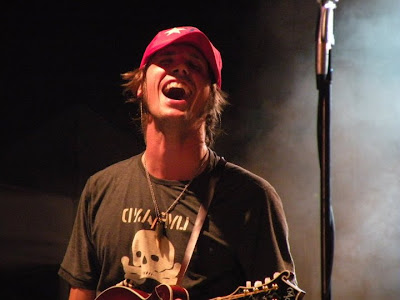 Thanks, Brian, for being so accommodating! We love getting to know you a little! Keep checking back, congress, for a continuing series of blogs introducing newcomers Cassady (DOC) Feasby on bass and Dan Hochhalter on fiddle!

I'm thinking Dierks needs to add "Band of Brothers" to the set list!