CMA HONORS DIERKS BENTLEY AND BROOKS & DUNN WITH INTERNATIONAL ARTIST ACHIEVEMENT AWARDS DURING HUGELY SUCCESSFUL AUSTRALIAN TOUR
NASHVILLE - Kix Brooks and Ronnie Dunn of Brooks & Dunn, and Dierks Bentley, all acclaimed internationally as musicians and performers each received the distinct privilege of being presented with the CMA International Artist Achievement Award for their contributions to Country Music overseas. They were presented the awards backstage at the Acer Arena May 6 in Sydney, during the final stop of their hugely successful Australian tour. 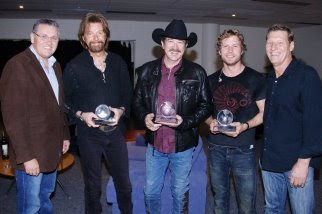 The International Artist Achievement Awards were presented by CMA Board member Rob Potts, CEO of Rob Potts Entertainment Edge, and Ray Hadley from Radio 2GB and currently Australia's No. 1 rated radio presenter.
"Halfway around the world, it is easy to say, but it takes an amazing amount of coordination and commitment from so many people to pull it off, and ultimately, and most importantly, the support from the fans," Brooks said. "As usual, we get to just walk out on stage and do our thing, but it's hard not to stand there in Sydney, or wherever, and go, 'Wow, how did this happen?!' Thanks so much to everyone who shared this experience with us!"
"It's fantastic to be recognized by the CMA after all my international touring in Japan, Europe and now Australia - this is very cool," said a surprised Bentley.
"I can't think of any more deserving U.S. artists to win this award," Potts said. "Their tour here has had a huge impact on the profile of Country Music in this territory and it's fantastic that we were able to present the awards to them in Australia. It's also terrific to have a former CMA International Broadcaster of the Year and Australia's No. 1 rating radio presenter, Ray Hadley, here to help us surprise the guys with their awards."
"It's fantastic that artists like Brooks & Dunn and Dierks make the effort to travel half way around the world to play to their Australian fans," said Hadley. "They bring huge excitement to this market."
"Ronnie, Kix and Dierks have all impacted and expanded the international market place for Country Music," said Tammy Genovese, CMA Chief Executive Officer. "As representatives for Country Music on a global scale, they are all very deserving of this prestigious award."
Formerly the International Touring Artist Award, the CMA International Artist Achievement Award recognizes outstanding achievement by a U.S.-based artist who contributes to the awareness and development of Country Music outside of the United States. Previous winners include Dixie Chicks, Shania Twain, Keith Urban, Trisha Yearwood, and Dwight Yoakam.
Nearly two decades after their music career began the biggest recording duo in Country Music history arrived in Australia for the first time in February 2008. Back again in 2009 with opening act Dierks Bentley, the high-octane Brooks & Dunn Australian tour played packed venues in Brisbane, Melbourne, Perth, and Sydney.
"To have Brooks & Dunn back here twice inside two years is a great boost to Country Music in the country and it is very fitting that they and Dierks are recognized by the CMA Board for helping grow our genre of music around the world," Potts said.
Bentley began his international career in 2006 when he participated in CMA's "New From Nashville" tour performing in Dublin, Glasgow, and London. He has performed at the Country Rendez-vous Festival in Craponne, France; the Seljord Country Festival in Norway; The Borderline in London; and performed at the Country Gold Festival in Japan.
Posted by DB Congress at 9:06 PM