DB Congress rep, Lynne (NJ), never thought she'd live anywhere but Texas. So when her husband got a promotion three years ago with his company located in Philadephia, PA, moving to New Jersey (a short commute) made her feel a little out of her element. She chose her Dierks Bentley Fan Club name--BabEb00mer--"because I feel like Dierks' music brings back a very familiar sound to any of us having been in high school and college in the 70's." She looks at life as an adventure. Below Lynne shares three of her favorite "Dierks Bentley" adventures!

Philly Concert
"The first concert my husband took me to here in the Philly area to get me through being homesick [for Houston] was Kenny Chesney with Dierks and Sugarland. Our seats were on the side not on the floor but almost right next to the stage. I fell in love with Dierks' music right then and there--it was magical! We were in the 3rd row and I was standing up through his entire performance although there were so many people around us who obviously were only there for Kenny.

Towards the end of Dierks' set, he points in our direction and I wave back. Dierks tossed a guitar pick my way and the people in front of me caught it. I was a little embarrassed since I figured he must have been pointing at them not me. I'm not one to make signs or make a scene so of course my husband is laughing at me. But then Dierks comes back over our way again, points in my direction and tosses another pick. I'm so not coordinated when it comes to catching anything mid air, but this time the pick hits me right in the chest. Dierks laughs and says in the mic that he at least has good aim. Now I'm very red in the face and honestly have no idea where the pick ended up but it didn't end up in my hands.

Dierks made me feel so special that he was actually pointing at me and I appreciated the way he really took care of getting as many fans involved in the concert as possible from that personal side he shows to all of us. I loved every minute of his performance, loved his music, the passion he has for his craft and how humble he comes across to everyone. All great qualities. I joined the fan club the next day and have been a die-hard fan from that point.

Houston Livestock Show and Rodeo concert
We had planned a trip back to Houston to see friends and to get me through that "home sick for Texas" feeling and realized that we would be there when Dierks would be performing at the HLS&R which is one of the largest fund raising events in Houston. We purchased tickets and I signed up for a meet and greet never thinking for one minute I'd be selected since I had signed up so many times in the past and had never been lucky enough to be selected. When I received the e-mail notification I think I went into shock. I was so excited but also worried I'd make a fool of myself as soon as I came face to face with the man. The guitar pick incident was a reminder that I could be easily embarrassed!

When we arrived at the event and I went to the designated location, I ended up being the first in line to meet him. I wasn't as prepared as I thought I'd be, shaking like a leaf, he took my hands and told me it was great to meet me. When he asked me my name I swear my mind went blank and he asked me again so he could sign the CD I handed to him for his autograph. He did impress me by asking me if Lynne was spelled with or without an 'E' which for me it's with an 'E'.

When he asked me where I was from and I said NJ he stopped writing and looked me straight in the face and said, "New Jersey?" I told him that I came a long way to see him and he said, "you have no idea how much that means to me for you to make such a long trip." I didn't tell him that I was actually from Houston and had come back to get over a little homesickness but that he was just the bonus on top of everything. 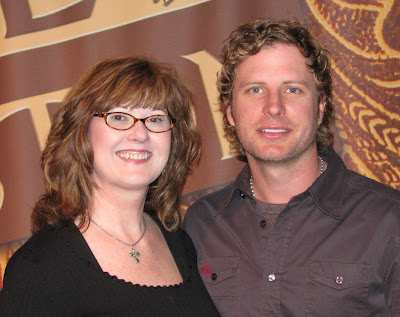 Seeing firsthand how he interacted with each fan in that room like it was just the two of them made me realize even more how he values his fan base. He actually knew several of the people in line and called them by name. When we all gathered in a circle around him for any questions after he spent one on one with each person, he went back around to every person and gave us another hug, thanked us for our support and told us again how much he appreciated us. This was just another affirmation of why I love everything about Dierks. He is still grounded and works hard to get to where he wants to be in his career.

I can appreciate the hard work and see this is not just a job to him, it's a career, a passion, what he is meant to be doing with this life.

Philly Last Call Ball
When the announcement was made that he was taking the Last Call Ball on the road and the Philly date was announced I again signed up and was completely in shock I had been selected to attend. When I arrived, it was fairly obvious that it is more than a bit disorganized.

Dierks stepped up and made sure his fan club was taken care of after finding out that while we were all with him in the meet and greet the venue did not section off any seating for his fan club. There were no seats available to us for the concert and we all ended up way in the back standing room only. Dierks made an announcement to his fan club members not to leave after the event that he would be giving a private performance just for us. 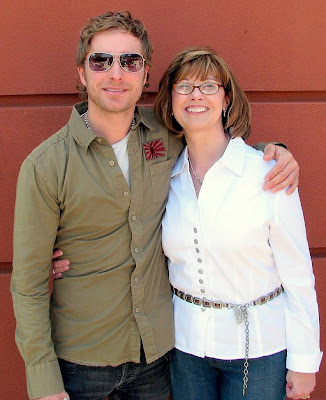 You know he did not have to do that at all and we knew he still had time commitments for a back yard barbeque someone had won and then had to get back on the road to the next Last Call Ball event. While most of us stood in the very back of the event, most fans didn't complain because we support him regardless of what happened. Just being there seeing him in person was such a wonderful experience for me. I know most people never get the opportunity to see him up close and have a photo taken with him, and I feel very blessed for just getting that experience of a lifetime.

Dierks doing everything he could to make it the best Last Call Ball experience for his fan club members and everyone attending the event was no surprise, given his generosity and appreciation to his fan base. I know everyone who stood in line to get a photo and an autograph after the event became a fan for life that day.

Promoting.
As for promoting Dierks, I have links on my facebook page, give his CD's as Christmas Cards to family and friends and wear the Dierks.com bracelets all the time. I currently have 'Sideways as my ringtone and if I'm in a location where I can let it ring more than once I do, so I can make comments like - "Don't you just love Dierks Bentley's new CD?"

How can anyone be in a bad mood when you hear Dierks music blasting in the car or on my iPod?"

Welcome to the DB Congress, Lynne! Thanks for all you do to support Dierks!