THINKING "INSIDE" THE BOX

When I was in Nashville March 14, I met Kim from Kentucky. Like every DRT (Dierks Road Trip), we DBC reps always try to think of unique ways to promote Dierks Bentley to the concert crowd. Kim had a great idea to buy dozens of boxes of Cracker Jack and label them with a dierks.com and dbcongress.com fan club message! The local radio station allowed her to hand them out at their table outside the Sommet Center before the Dierks/Brad/Darius concert. 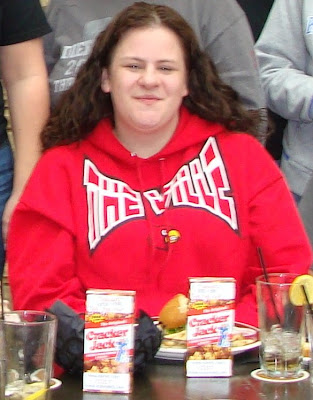 When the Feel That Fire CD was launched, I remember the promotion Capitol Records announced to send out CJ boxes to radio stations with various prizes inside, including a backyard party. But I never really heard if my local radio stations received one of the boxes or if anyone won any of the prizes.

Yesterday, americajr.com posted an article about the Cracker Jack promotion (see below). It says someone in Greensboro, North Carolina won the grand prize from WTQR radio. If you're a NC DBC rep, please post a comment and fill us in on the scoop!

For record labels seeking to promote their artists, it often pays to think out of the box. But for Dierks Bentley and the team at Capitol Records Nashville, thinking inside the box has its rewards too.The box, in this case, is that familiar cardboard container whose festive colors and image of a smiling boy in a sailor suit identify its ingredients as Cracker Jack. This mélange of popcorn, peanuts and molasses has been a national phenomenon for more than a century - so long, in fact, that it was celebrated in the third line of the lyric to "Take Me Out to the Ballgame" ("Buy me some peanuts and Cracker Jack"), written by Jack Norworth in 1908 during an otherwise routine subway ride. 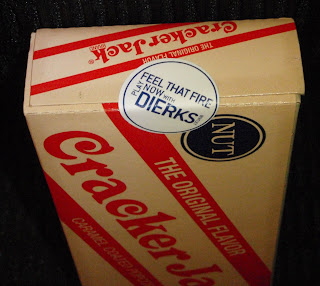 A century later, Bentley drew from the same well when he joined Brett Beavers, Brad Warren and Brett Warren to co-write the No. 1 song "Feel That Fire," whose second line reads: "She wants the toy in the Cracker Jacks." By the time he dropped by his label to play it for members of the staff, he believed enough in the song to suggest they release it as the first single from his upcoming album. (They agreed and decided to make it the album's title cut as well.)

Like candy on a hungry kid's fingers, the tune stuck in the mind of Cindy Mabe, VP Marketing, Capitol, after she left that meeting. "The Cracker Jack line is the one that hit me the most," she remembered. "The more we talked about it, the more we thought it would be cool to see if Cracker Jack would be interested in partnering with us."

A bit of research led to Mark Vitek, who was at the time Brand Manager for Cracker Jack at Frito-Lay, Inc. Fortunately, Vitek was also a Bentley fan, so the pieces were poised to fall into place. The only question was: What picture would the pieces form?

Vitek had the answer: a sweepstakes to promote the single by shipping 2,000 boxes of Cracker Jack to Country radio stations. Fifty-one of those boxes would include scratch-off prizes - 10 autographed guitars, merchandise, personal phone calls, personal station liners posted to the Web sites of winning stations and other items. One would come with a grand prize in the form of a free backyard concert by Bentley. Each station offered its prize to listeners through contests or drawings, after which it was determined that the grand prize had gone to WTQR/Greensboro, N.C., and from there to one of its lucky listeners.

The payoff was immediate. "It got Cracker Jack into Billboard, R&R and places they wouldn't ordinarily have been mentioned," Mabe said. "To be associated with music and cool, hip magazines isn't an everyday thing for them. And it was good for us too. The campaign was originally supposed to happen just after the single had gone to radio as a tease of more to come. Instead, because the single was racing up the chart so fast, we ended up moving the campaign closer to the album launch than planned and that helped spread the word that much faster too."

Somewhere, Norworth is smiling appreciatively.
Posted by DB Congress at 7:36 AM