KELLY CAMPAIGNS FOR DIERKS IN WISCONSIN

"The first one said of course! And they played me requesting it and then Sideways came on. The second station had just played Sideways 20 minutes prior, but I didn't hear it so they asked what song I wanted instead and I said anything Dierks so he played Free & Easy for me--at the same time as Sideways was on the other station! It was so funny to hear myself requesting Dierks on two stations at once! The third station I requested Sideways again and once the first two stations had finished playing Dierks, Sideways was on again--all in like a 6-minute time period!"

When Kelly got home, she did her DBC duty and voted online for the Sideways video on CMT and GAC. "With the links section on dbcongress.com you've made it even easier to vote everyday for Dierks! Thanks!"

What a great role model for all DBC Reps to do our daily campaigning for D in a little over 6 minutes!

Kelly's first DB Fan Club M&G was in 2008 at Countryfest in Cadott, WI.

"I was first in line to meet him and extremely nervous. He asked me my name and introduced himself as Dierks.(cute, huh? I already knew that!) He said nice to meet you, and thanks for coming to the show. He made me feel not as nervous because he acts as though he's been a long friend.

Then we took a picture and he signed my Greatest Hits cd - near my name in the Executive Producer list. After everyone went through the line we got some time to just talk with him which was great as well. 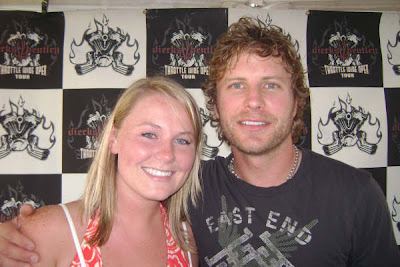 He is so genuine, and I am so thankful for the M&G's he does for us!"

Her next DB encounter was a few weeks ago at a double-header in Prior Lake, Minnesota where Kelly wore her DB Congress shirt for the first time!

"This time at the M&G there were a lot of people there! I had one on Sunday 4/26/09 and I had him sign my DB Congress shirt! I mentioned I was wearing it last night and he said I saw you over there on the right side! (which was where I was!) (Thanks again Mona for the shirt, such a cool thing!) We then got a picture taken together. After everyone was done we got a little time with him again. He mentioned he was going to tape The Ellen Show the next day. I asked him if he was going to do any bluegrass songs that night because the night before he didn't, but he said they were pretty limited on time and were using the set list I think they used when he opens for Brad. It's all good though I was happy to see him and go to another show that night! He also said he'd be going over to Australia with just the band, no Cassidy or Evie. After the time we had with him we all got hugs, which was great! I said thank you and he said well thanks for coming out! I was still nervous this time when I picked up my M&G pass my heart was already beating crazy! I don't know if I'll ever get over that!" 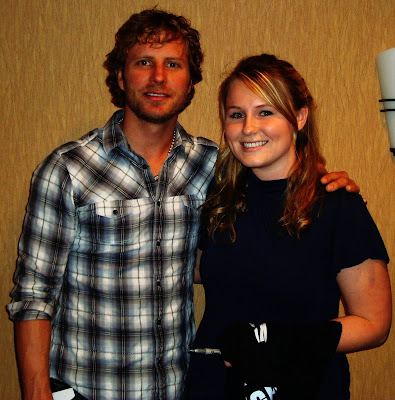 "I had great seats but didn't use them! As soon as Dierks started people were up off their seats and singin' & dancin'. For the first few songs I was able to run down to the front and get pictures when the security guy in front kept telling us we had to go back. Finally I decided I was just going to stay down there because what fun is it without being in the front? Dierks was runnin' back and forth getting the crowd into it! It was cool looking in the back and seeing everyone having fun! Dierks would run from side to side slappin' hands. It was exciting! The guys played awesome as well! I also got to meet more fan club members which was really cool!

The second night at Prior Lake, we waited around until the lights went down and then ran down front since Tiff & Sam got seats in second row and were able to save us a spot. During "So So Long" and a couple other songs, Dierks came over to where we were and let us sing into the mic. I remember him laughing too because I'm sure it was funny to watch us singing so loud! What a great time!"

What great DRT memories, Kelly! Thanks for sharing!
Posted by DB Congress at 10:28 PM