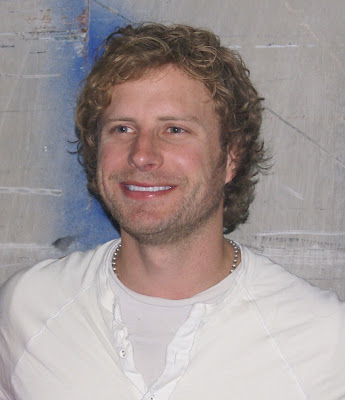 Aussie DB Congress rep, Vicky thought she was going to have to fly all the way to the other side of Australia just to see Dierks Bentley since nobody ever comes to Perth. Most performers only do the east coast of Australia. "Western Perth is the most isolated city in the entire world," claims Vicky. "We do not have a country radio station, Dierks is not played on the commercial radio stations, no Dierks on TV, no Dierks in the music stores or any shop. The only contact we have with Dierks is via CMC if you have paid TV (no CMT or GAC) and the internet."

So she was beside herself when Dierks' tour brought him to Perth on May 1, and even more excited when she learned she had been chosen for a Meet & Greet by applying through the fan club. Here's her story:

"I was told via email to collect my envelope early so that I didn’t miss meeting Dierks. The Box Office opened at 5pm, the doors at 6pm with Dierks scheduled for 7.40pm so we didn’t know when we would be seeing him. I collected my envelope, sat down, and took a bite of dinner and Chris (hubby) asked had I opened the letter yet to see where we would be going. I opened it and as soon as I saw the gorgeous red M&G pass and instructions I felt all funny. I couldn’t breathe. I didn’t know if I wanted to be sick, go to the toilet or just pass out right there. It hit me....I was going to meet Dierks. 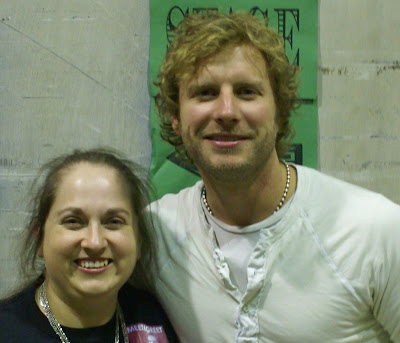 That was it for dinner, I couldn’t eat anything else I felt so sick. Chris was cracking up laughing at me and offered to get me oxygen from the ambulance people but I said no. Mikayla (daughter) was also laughing , here I am her mum a grown adult being told by a 9 year old that it’s ok I am just too excited!

We then lined up at the door and met some people who were there for Brooks & Dunn they had been married for 33 years and this was their valentine’s gift to each other. It was great talking to them because they were not Dierks fans, they liked him but not like me. They kept me talking about other country stars and the internet and various bit and pieces so my mind was off meeting Dierks and I didn’t get carted off in an ambulance before the doors even opened.

Doors finally opened 10 minutes late and we then went in and found our seats which were in the 5th row. I couldn’t believe how close we were but we did pay just under $900 for the tickets so it was worth it.

It was time for the M&G so we waited for Chris (Dierk’s Manager) to come out and collect us and take us back stage. We were waiting in the hall area and Dierks was in the room across from us but upstairs. We could see the door as it was right in front of us, he comes to the door and the first thing he says before even stepping out was “ Even a congress shirt!” He looked so surprised and then walked down the stairs to us. I was the only one with it on and it got his attention big time and he spent ages talking to me.

Dierks looked amazing. He had on jeans with a cream jumper/top on. I then gave him his gift which was some Vegemite, Aussie Peanut Butter and a few Australian souvenir bits, a card and letter and Tim Tams for Cass and he loved that. I gave him strict instructions to make sure he gave the Tim Tams to Cass and he said that he would. 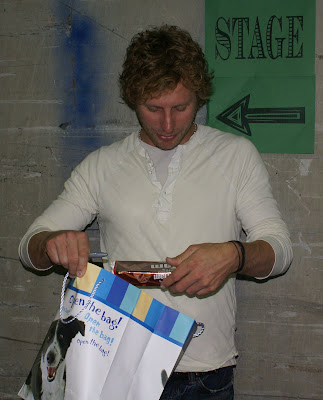 I got to stand next to him in all the pics and I put my arm around him and he responded by putting his around me. I wasn’t going to stand there and not do it...lol It felt GREAT! 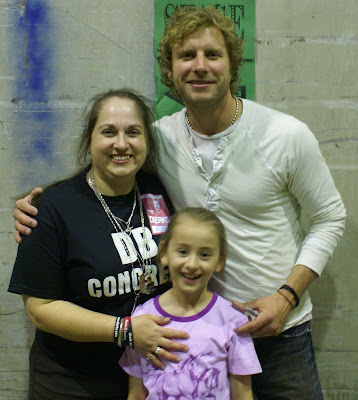 Mikayla stole his heart and Dierks asked to have several pics with her and wanted her to stand with him for the Official pic. I didn’t mind because I snugged in close to Dierks. They high-fived one another several times and had their own conversation which I am still trying to find out what he said to her but she is too happy to give the details. 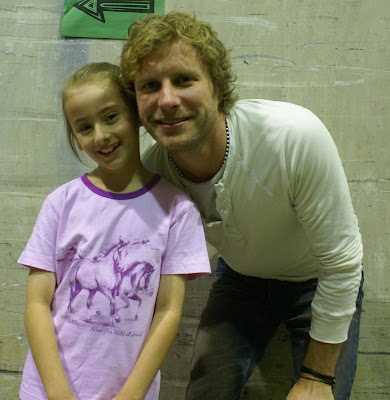 Dierks signed an aussie flag for Mikayla and wrote Love Ya on it. She slept with it last night. He signed my Opry Cook book that Holli sent me last year and my cd cover for Modern Day Drifter. When he was signing it he did ask “Why this cd?” and I told him it was because it was the only one that I didn’t have signed. He then asked me who my contact was in the US and I told him Holli from SC. He smiled and said “Yes Holli is great.”

The M&G was amazing and I felt so comfortable with Dierks, like I had known him for years. He was “normal” if that makes sense. Dierks did say that he was very tired and could not believe how the jet lag had gotten to him. He went to bed 7:30 pm the night before. He also said that he feels like he is living in the future because when he calls home, it’s still yesterday there. I don’t think people realize how far away we are down here until you actually experience it and I think Dierks was really feeling like we were at the bottom of the earth and it has hit him that we are miles away. The time difference and flights look ok on paper but to actually do them it really enhances how far we are from Nashville.

The concert. Dierks said that he didn’t know what to expect here in Australia and he was completely blown away when he stopped singing and the crowd continued, he couldn’t believe that we knew the words to his songs! He was shocked and I think it made him feel really happy. He sang LOTS including How Am I Doin’, What Was I Thinkin’, Feel That Fire, Sideways, Trying To Stop Your Leaving, Settle For A Slowdown, Lot Of Leaving Left To Do, Come A Little Closer, Life On The Run, Every Mile A Memory and Free & Easy. 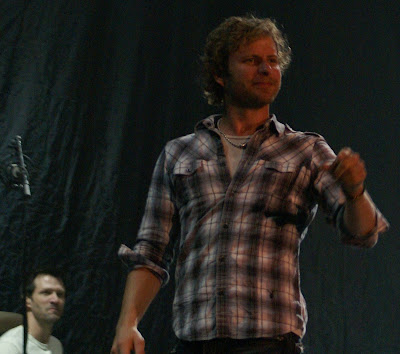 Dierks also asked for a little white tank top and a girl ran up to the stage front and he held her hand. He also held lots of girls hands but checked their left hand and as soon as he saw a ring he said oh no and moved on to the next one, it was so funny.

For a man who was tired from all the travel he put on an awesome show and was running up and down all over the stage and really singing his heart out and putting so much effort into all his songs. I was so impressed with his performance and so was Chris, he is now 110% converted. At the start of the evening he was the camera man, bag carrier and driver but at the end, he was a true Dierks fan and cannot wait to see him again. He finally understands my obsession with Dierks. I had an amazing time and it was truly a gift to meet Dierks and be at his concert. For those of you attending his other concerts, you are in for an awesome time and Dierks is BRILLIANT."
Posted by DB Congress at 2:22 PM