You may recall reading, the "But Where's Stacey" blog a few days ago. Stacey's been doing a great job of recruiting more "International" members into the DBC! So much so, that I have decided to promote her from First Australian Rep to Director of International Recruitment for the DB Congress! Here's what she's accomplished in her first seven days in office:

"Hey Congress! I did 2 good deeds today: I somehow managed to recruit two of my Myspace friends into the Congress! Both are Aussies [and one is even from Tasmania - like me!]. There's beambabe [mish] and TassieDBFan [Nigel]. I'm soooooo happy that my blog/note on Myspace & Facebook managed to pull people in! Plus it helped that Dierks personally replied!"

Stacey is referring to the fact that Dierks - the Dude, our president himself - personally replied to her concert review on Dierks.com:

haha...thanks stacey for the great post!!! i was so happy to finally meet you in person! the show in melbourne was "wicked"....i walked off stage feeling like we had really connected with the audience and that everyone was having a blast. must say it was also great to see vicky in perth...really great knowing i have hard core fans like you guys down under here....

How many artists do you know who will reply to a fan's post? I don't know of any except Dierks Bentley!

With her efforts, she has helped the DBC be within 25 reps of reaching of our 500 goal! We are at 475 right now, 33 of which are International.

Now, Stacey doesn't know she's been promoted, so "mums" the word! Shhhhhhhh! I am sure her new duties will keep her busy trying to find new DB Congress reps in countries outside the U.S. and sending them to dbcongress.com! 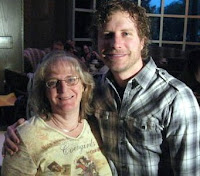